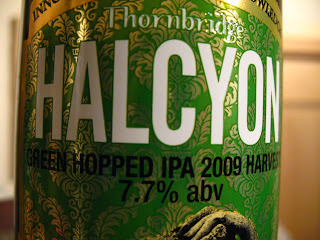 Because I'm such a frightful ponce, I like to try out food and beer combinations. I like to think that sometimes, you can get something that's greater than the sum of its parts - the beer and the food enhance each other, and you notice things in each that may have slipped by unnoticed. And of course, because I'm such a frightful ponce, I couldn't possibly do something as simple as compare a couple of IPAs over a chicken jalfrezi. No, tonight it's Thornbridge Halcyon (7.7%abv) and kedgeree.

I won't write a great deal about the beer, as I sort of cover everything I want to say about it in the video. But I will say that after a long chat on the phone with Kelly Ryan, one of the brewers who helped create Halcyon, it's clear that they are both a brewery who like to push the envelope a bit, and are quite open about what happens when they try to do that. Kelly didn't pretend to be delighted about having a lot of very loose sediment in the bottle, but neither did he think it was the end of the world. In fact, as I show in the video, there's nothing wrong with the sediment, and I'm almost sure it was more strongly-flavoured than the brighter glass of beer I drank afterwards. Who knows - maybe some of those flavour compounds are lipophillic and bound to the lipids in the yeast cells. Yes, I know I'm good, but I didn't figure that one out myself - egg-headed, Segal-bodied Stuart Howe of Sharps planted the seeds of it here.

The Halcyon wasn't a perfect match for the food - I think that maybe a hopfen-weisse would be a better match - but it did the job pretty well, acting as an admirably spicy, citrussy cut against the spice and smoke of the kedgeree. Irritatingly, a chicken jalfrezi with a load of mango chutney would have been near perfect with Thornbridge Halcyon

Fry two finely sliced onions with half a finely diced green chilli, until the onions are golden. Add ground cumin and ground black pepper to taste (about half a teaspoon of each). Add the rice, peas, flaked fish, the chopped boiled egg (or top with a poached egg), and a handful of chopped coriander. Stir, season, serve.
Posted by ZakAvery at 19:15