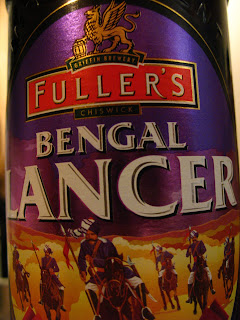 At the start of February, I spent an action-packed couple of days in London. In the space of 24 hours, I attended a committee meeting for the British Guild of Beer Writers, went to the Drinks Retailing Awards at The Dorchester, slept, met friends for breakfast, and visited Fuller's of Chiswick. The Fuller's visit was great fun, and I'm going to write in more detail about it over the next few days. But I'm going to start by talking about what I didn't get to do at Fuller's.

The tour and tasting that John Keeling and Derek Prentice laid on was so enjoyable that time flew by unnoticed, and by the time we got to the end of it, I had to literally run to the tube to make my train back to Leeds. So what I didn't have time to do was (a) visit the Fuller's shop to buy Vintage Ale for my birthday (I ended up getting it couriered to Leeds), and (b) stop in at the Mawson Arms for a pint of the newly released Bengal Lancer IPA. However, being a decent bunch, Fuller's forwarded a couple of bottles to me.

The beer is a copper-gold colour, and pin-bright in the manner that Fuller's beers tend to be, despite being bottle conditioned. The aroma is classic Fuller's - so classic that having visited the brewery, I can say that it smells like a cross between their brewhouse and hop store. If you haven't visited Fuller's, that's not very descriptive, so I'll try a bit harder. Bengal Lancer smells of spicy whole leaf hops (although they use pellets), toffee, ginger cake and ozone. On the tongue, there's an initial burst of medium-bodied malty toffee, which is slowly reeled in by a dry, spicy bitterness, finishing with bitter flourish and a faint puff of geraniums.

I like this beer a lot - it's got a lot of understated hop character which might fool people into thinking that it's lacking in hops, but when you actually pay attention to what is going on, there's a huge wallop of spicy dryness in the finish. It's a worthy addition to Fuller's roster, rooted in history, but produced with an eye for the quality and consistency that are Fuller's bywords. It's got that classic Fuller's character that reminds me of gingerbread and, most importantly, I've got another bottle of it that I'm going to eat with this burger and onion rings that has materialised miraculously next to me.
Posted by ZakAvery at 19:13