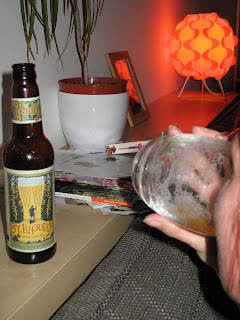 It's great working as a beer retailer. I always say that it's the best job in the world, apart from the hours and the money.

But one of the main benefits is reaping the fruits of my labours. Over the last three or four years, I've made a real effort to source the best of the best for our customers, and they have appreciated it. In fact, it's led to me discovering a new, unknown brewery, which I hope to be delivering to the good people of Leeds in the next month or so. The beer that really turned my head was a 3.5%abv blonde session beer that had so much flavour packed into it that when I gave to a friend and told them the strength, they said "F*ck off!". But the main thing I thought was: "Leeanne would love this".

My partner Leeanne is one of those rare females who loves beer. OK, I know that they're not really that rare, but as long as I've known her, real ale has been high on her 'to do' list. Early on, the phrase "ooh, they have Bass, a pint of Bass please" made me realise that I'd unearthed a rare treasure, and since then, I've done all I can to keep her interested. One of those things I have to do is Wednesday night beers.

Wednesday night is special, because Leeanne has Thursdays off. Wednesday night is like a private Friday night sneaked into the middle of the week. It's not really a proper Friday night, but because she doesn't drink on school nights, we have a few beers together. Tonight it's been a BrewDog Trashy Blonde and a couple of Odell's St Lupulin.

Lately, Leeanne has developed a preference for a certain style of beer. Pale, well-hopped beers are what she likes, although she will drink Brooklyn Lager and Sierra Nevada without complaint - nay, she will drink them with gusto. If the alcohol goes beyond a certain point, or the colour goes beyond a certain point, they get rejected. There's a very clear interplay of colour, intensity and %abv that she detects quickly and decisively.

This was demonstrated tonight by having a glass of Odell's St Lupulin (6.5%abv) and Dogfish Head 60 Minute IPA (6%abv). I offered her the choice of either, and after tasting them both, she wrinkled up her nose at the DFH 60 (sorry Sam). I told her: "It's not as strong as you think - the St Lupulin actually has more alcohol in it". "Then why would I want that? I'll take this one thanks", and retired to her end of the couch with the St Lupulin.

So that's my responsibility as a beer provider. I need to make sure that there is an appropriate beer at any point that it is required. If I was catering for a less discerning palate, it might be a tiresome chore. But having someone who is interested in the variety of flavours, colours and intensities keeps me on my toes, and close to the top of my game.
Posted by ZakAvery at 22:41