Witbier - Mikkeller Not Just Another Wit 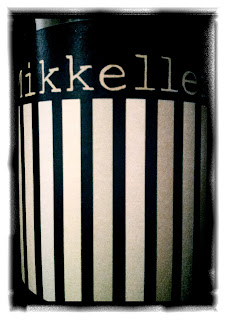 If there is another brewery (cuckoo, gypsy or otherwise) that better epitomises beer in the 21st century than Mikkeller, I've not heard of it. And I keep my ear pretty close to the ground these days.

Mikkeller specialises in taking a beer style and, like the geeky kid that nobody really wanted to be friends with, but everyone acknowledged was something of a braniac, pulls it apart and studies how it works before reassembling it into a ne plus ultra example of the style. NJAW is a great example of that approach. Belgian witbier, made popular by Hoegaarden Wit in the late 20th century (hey, I was there) is one of those not-beers that relies on things other than malt and hops for its character - namely, wheat and spices. The wheat (wit) lends a roundness to the palate and a slight tartness to the finish, while the spices (coriander and curacao) add a completely different dimension of flavour and aroma.

At a time when everyone is in slavish thrall to hops - myself included - it's great to have something different that is made with a more-is-more "craft beer mentality".I remember visiting Kelso of Brooklyn in 2007and Kelly describing his beer as "like beer, but with more stuff in". So it is with this beer (and most of Mikkeller's output). Everything you want in a witbier - yeasty, spicy orange aroma, soft spritzy mouthfeel, coriander spice-burst finish - is here, but all turned up to 11. It's like Celis Wit on steroids. It's an old Belgian style on a rollercoaster. It is, God help me, an imperial witbier.

NOTE: I buy and sell this beer through the business I own, although I don't think this has influenced my opinion of it
Posted by Zak Avery at 00:10