We'll start with a correction. All the way through the video, I refer to this beer as being 65 years old. Of course, if it was bottled in 1936, it's actually 75 years old (well, 76, to be precise). I've no idea why my maths failed me - I think it's something to do with being 40 in a few days, and refusing to acknowledge the passage of time after the year 2000. 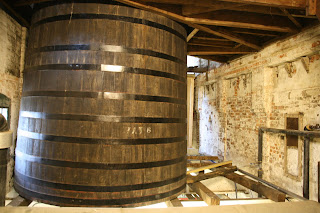 I know that I've blogged on Greene King's wood-aged beers before, so I won't retread that. If you'd like to look at what I said about Old Crafty Hen and Strong Suffolk Vintage Ale, you can do so here. But I will say again that I think their wood-aged and blended beers are not only interesting to drink, but also a fascinating piece of preserved history. I know of another UK brewery who are about to reissue some of their old beers as part of a historic series, and also produce a variation on the theme of blending stock (stored) and running (fresh) ales. Someone else is about to do that, but Greene King are already doing it. 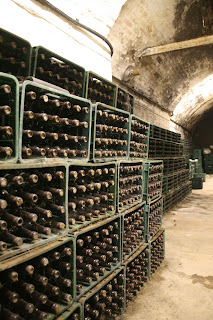 So, when I left Greene King, they very kindly let me take a bottle of their unlabelled 1936 Coronation Ale. This was for the coronation that never happened - in between acceding to the throne and being crowned, Edward VIII decided he'd rather marry Mrs Simpson than be king of England. She was clearly a hottie of epic proportions to be able to make him throw away such a splendid meal ticket, but I digress.

It's the oldest beer I've ever drunk, and it was actually in pretty good shape. A little tart, a suspicion of being slightly corked, but still pretty drinkable. It smelt of madeira, old wood, dust, fruitcake and that slightly undergrowthy note that the French call sous-bois. It's clearly old, but given it's modest 4%abv, it's held up remarkably well.

The blending thing was a moment of inspiration, where I didn't really want to drain pour a 75 year old beer, but neither did I feel like tackling a whole bottle - it was good, but challenging. Thing about Greene King's history of blending beers, I thought I'd try a little in with the Hen's Tooth. It added a great depth and complexity to the Hen's Tooth, and conversely, the Hen's Tooth gave a bit of structure and support to a beer that was on it's last legs. If you're got any 75 year old beer kicking about in the cupboard, why not give it a try?