The Rooster and The Gargoyle (or: Why Freshness Matters) 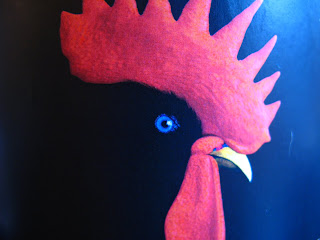 I had a night on the black IPA last night. Frankly, I should've stopped after drinking the 75cl bottle of Rooster's Oxymoronic Black IPA (6.5%abv), but for whatever reason, I threw caution to the wind and subsequently opened a bottle of Stone Sublimely Self-Righteous Ale (8.7%abv). I felt every one of those 10 units the next day (today), which served to remind that (a) it's stupid drinking like that on a work night, and (b) I don't really get that drunk these days - it's been ages since I had a beer headache like the one I had today.

Rooster's Oxymoronic was a very limited run of Black IPA brewed by Sam Franklin as a farewell to the brewery - he's now emigrated to Canada, and is going to work for the Dead Frog Brewery. It was a delicious dark red ale, stuffed full of sweet dark malt character, mandarin hops and a hint of sarsparilla (or maybe dandelion and burdock). I couldn't believe what an easy drinking beer it was, and by virtue of its freshness, was absolutely bursting with vitality. 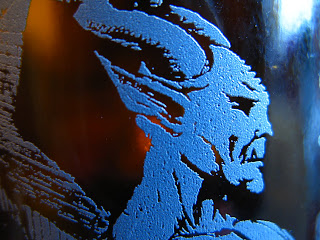 The bottle of Stone Sublimely Self-Righteous that followed was also a great beer, but much more full-bodied, and the hop character more muted. That's not to say it was a bad beer, but Stone, who are fanatical about the freshness of their beers, might have thought that this bottle was slightly suboptimal after its long trek to my glass.

Although these two beers sit broadly in the same style, they are formulated differently, and so comparisons are dodgy at best. But one thing that shone out was the freshness of the hop character of the beer that had been brewed recently, and had only travelled 30 miles to get to me. A similar thing was brought home to me when, last year in Rome, I tried side-by-side samples of Birra del Borgo - Dogfish Head My Antonia, one brewed in Milton, Delaware, the other in Borgorose, Italy. Needless to say, the local sample again won out that night.

There are a couple of other examples that spring to mind about how fresher beer has tasted better to me. Drinking bottles of Brooklyner-Schneider Hopfen Weisse in the Uk was an oddly joyless experience after having tried the beer straight from the conditioning tank. And what ever happened to Red Brick Brewery Fresh?

Anyway, I'm aware that all of these things are a matter of taste. I've gone on record in plenty of places saying that I'm not crazy about ageing most beers, and that I enjoy most beer (and most wine, for that matter) with a little skip of youthful vigour left in it. In fact, while I mention wine, it's worth trotting out the wine world's maxim that there are no great wines, only great bottles of wine. Maybe there are also no great beers, only great glasses of beer.

Of course, all this went out of the window when I saw what the postman brought me this morning. But I'll save that for the next blog.
Posted by ZakAvery at 22:20