I'll Have an E Please, Bob 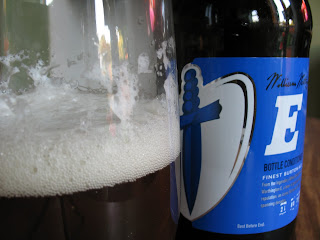 I've got a glass of Worthington E in front of me. It's a bottle conditioned beer from the White Shield brewery in Burton upon Trent, 4.8% alcohol by volume, copper brown in colour, with a deliciously complex aroma - nutty bread, baking spices, some caramel - and a similar set of flavours playing out across the palate, but finishing dry, spicy and nutty.

As anachronisms go, it's pretty enjoyable, but it's still an anachronism. Worthington E became a best-selling beer for Bass in the 1970s, when it saw widespread distribution as a filtered and pasteurised keg bitter. It was famous - notorious even - and like most keg bitter, production slowly declined until it became almost extinct. It's still been in occasional production, brewed by Steve Wellington at the Museum Brewery in Burton upon Trent on an as-and-when basis, mostly as a cask ale. But now it is about to be released in bottle, in smart blue livery.

And it's a great beer, classically dry and nutty, with that slightly abrasive hop dryness that is characteristic of beer brewed with the sulphate-rich waters of Burton. I'm enjoying it, but at the back of my mind, I find myself asking: Who is this beer for? Anyone who remembers the 'original' Worthington E (by which I mean the keg bitter) will be baffled by its reappearance - maybe they will buy it through nostalgia, and they will be pleasantly surprised. Anyone who only has a vague handed-down folk memory of it will probably steer well clear of it. I imagine that this won't be an atypical reaction to seeing the beer on the shelf again, and it will get passed over for something a bit more contemporary, a bit louder, a bit brighter. Which would be a terrible shame.
Posted by ZakAvery at 20:54