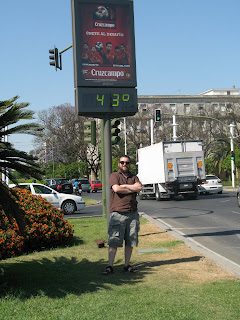 When the heat is on, there's nothing better than a small glass of really cold beer. They have that figured out in southern Spain - the caña, or diminutive cañita (canya or canyita, should you wish to try it out and are unfamiliar with the tilde) is the standard measure of beer, equating to anything from just under a half pint to just under third of a pint.

The idea of serving cold beer in small measures is a smart one. In the UK, by the time you get to the bottom of a pint, the beer will have reached room temperature - not so much of a problem for darker beers, but not what you want if you're drinking a lager. You could just drink faster, I suppose, but that's a particularly English solution to a European problem. Just order the beers in smaller glasses, more frequently.

One of the innovations in the five years since I've been to Spain last has been the introduction of Cruzcampo Glacial, a super-chilled dispense of the Seville-brewed classic. In my memory, Cruzcampo was my holiday beer par excellence - cold, snappy, crisp, and perfect to wash down plates of jamon or gambas. In actuality, Cruzcampo is an ordinary mass-produced lager, tasting slightly oxidised and having a faintly sweet yellow apple note, neither of which are appealing or refreshing. But give it the Glacial treatment and what you are left with is just a sensation rather than a flavour, a cool, snappy, crisp crackle of biscuity malt and a faint impression of hops, and all of the sweetness and flavour flattened by serving it just above freezing. Perfect for purpose - to slake a thirst and cool you down.

All the while I was drinking tiny frozen beers, I kept thinking about how I would never do this at home, and how although I was having the best holiday ever, it would be quite nice to get back to cold, damp Leeds and tuck into the bottle of Moor Brewing's Old Freddie Walker that I have waiting in the cellar. I eagerly checked the weather at home - cold and damp, perfect for sitting down indoors and getting acquainted with Freddie. But I get home, and summer has sort of sprung - hell, I'm wearing a short-sleeved linen shirt and sandals as I write this.

The early summer season of crisply hopped, grapfruity, zesty, sherbety, golden session ales is upon us. Bring me cool pints of zing, and leave the ice cold cañas to the caballeros of Andalucia. The English summer has begun!
Posted by ZakAvery at 19:34