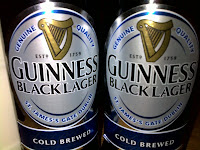 I have to admit to being slightly bemused by the news that black lager is the fastest growing category in beer at present. Clearly starting from a base of next to nothing, achieving multi-hundred percent growth is pretty easy. I remember the Summer of Magners, when they recorded something close to an 800% growth spurt. So perhaps it's hardly surprising that the world's favourite black stuff should seek to bag a slice of the pizza. And given that their black stuff is the most famous black stuff in the world, it seems reasonable that they should launch Guinness Black Lager (4.5%abv)

I managed to get a huge and fairly persistent head on this, by pouring it from a height of about six inches. I wanted to knock a bit of carbonation out of it, and by happy accident, I got it about right - what I'm left with is a very acceptable gentle prickle of CO2. There is a bit of DMS/worty character on the nose, and if I couldn't see that it was black, I wonder if I would pick out the faint roasted and chocolate notes? I'd hope that I would, but I can't be sure. Ditto the palate - there is a burst of flavour just after the swallow that vaguely suggests a bit of roast grain character, and a suggestion of herbal hops, but on the whole, it's pretty anaemic.

It's easy to knock a big brewery when they try something new, just as I did when InBev launched Artois Bock five years ago. In some ways, I really like their attempt to brew something that tastes inoffensive, but looks like proper Guinness - maybe that way people will be less scared of trying dark(er) beers. At the same time, it's a bit of a shame that it's so dumbed down - there is a suggestion of a good beer here, but it's all a bit too dilute to really hit home.

But what really kicks this one in the nuts for me is the back label: "Guinness Black Lager is cold brewed with roasted barley to deliver a unique character and deeply refreshing taste. Enjoy ice cold straight from the bottle. Lager evolved" How many bits of innaccurate, unhelpful and meaningless bobbins can you count in those three sentences?
Posted by ZakAvery at 19:16