This just in from the organisers of the conference - press release starts starts here:
The 2013 European Beer Bloggers Conference takes place July 12-13 in Edinburgh, Scotland http://beerbloggersconference.org/europe/ The conference offers industry representatives and members of beer media the opportunity to get together for a few days to talk and learn more about beer and the beer industry. There are over 1150 non-industry related beer bloggers in the world. We expect 120 of the most enthusiastic “new media” beer influencers to attend in 2013.

This is the number one event in which you can meet, learn from, and make connections with beer bloggers - the "citizen" influencers who write about beer on a regular basis on the internet. The content is also geared towards using social media in the beer world, which is a huge part of today's industry marketing.

You or someone at your brewery may use social media to promote your beer events or your latest brew. Good idea. If you want to learn about using social media more effectively attending the conference as a participant is also a good idea. You or they can register here: http://beerbloggersconference.org/register/

The following marketing opportunities are still available. Benefits and costs of the sponsorships are listed below the signature.

Email ThisBlogThis!Share to TwitterShare to FacebookShare to Pinterest
Labels: EBBF2013 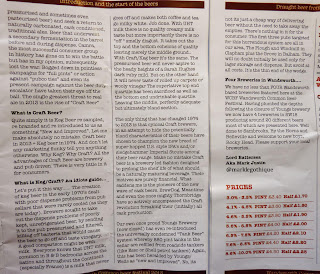 I really tried hard to bite my lip about this whole thing.

I said nothing when I first read it, because I've managed over the years to stop going off the deep end when I read something on the internet that irritates me. The truth is, if you look hard enough, you can find someone saying something ridiculous at any point on the web.

I said nothing when everyone went mental on Twitter about it - I even ignored this tweet from BrewDogBarJonny, sticking the boot into CAMRA (Wandsworth Beer Festival isn't a CAMRA festival). But that's not my battle to fight - if you look long enough on the web, you'll find all manner of lunacy going on. You might even find members of BrewDog's band of merry pirates saying things like "we took the recipe and BrewDogged it". Fine, I think I understand that, and jolly good luck to you. Hope it all works out.

I didn't say anything when the debate took a craft keg dimension over at Hardknott Dave's blog. I've softened my slightly rabid line on the term "craft beer", even occasionally dropping it into conversation in industry company, and watching to see if anyone flinches, or says "AHA! WAIT! YOU SAID CRAFT BEER!". I understand why people get all passionate and aerated about the debate, and sometimes think that if all that passion was channelled into the business of making great beer, and all of the tedious detail that goes along with it like proper cleaning schedules and quality control checks, the beer world would be a more reliable playground (please note: this isn't directed at anyone in particular, just a general observation based on frequently buying - and being being sent - an apparently endless parade of faulty, poorly-conceived or badly made beers, both in bottle and on draught).

But I've finally cracked. This post over at the ever-excellent Boak & Bailey actually had me LOLing and almost ROFLing. This is a great example of what happens when you take too seriously something that is obviously a ludicrous outpouring of ill-informed nonsense from someone with an ill-formed agenda. If I get this right, the thrust of the argument being taken seriously here is that bland beers are being disguised by giving them flavour. This is clearly buffoonery of the highest order. It's like moaning that some cultures disguise fundamentally bland food - chicken, say - by adding garlic, chilli, cumin and ginger to make something that is a betrayal of its source. That argument is, frankly, bollocks.

I'm starting to think that the idea of "good beer" is fundamentally flawed. There is beer that is well made, and beer that is badly made. And there is beer that I like, and beer I don't like. I tend to like well-made beer across a variety of styles. I can tell if a beer is poorly-conceived but well-made. And I can tell a badly-made beer a mile off (with the exception of the output of Cantillon, where I understand that I am in such a minority that my view is probably fundamentally wrong). But I can tell if the spices in a curry are there to disguise poor quality ingredients, or a lack of skill in the kitchen.

The lack of skill rarely resides in the quality of ingredients, but it can be glaringly obvious in how those ingredients are deployed to produce an end result.