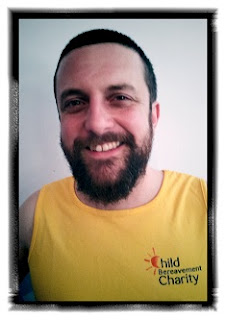 Those of you who follow me on t'Witter may have noted that I've been engaging in a slightly unnatural activity of late - to whit, running. And those of you with an attention span longer than 140 characters may remember this post about Ant Hayes, who sadly took his own life last year, leaving a wife and two children.

Long story short, on Sunday 16th September, I'll be running the 2012 Great North Run to raise money for Child Bereavement Charity. CBC is a national organisation that coordinates a network of workers who offer support to people in times of bereavement - parents who lose a child, or children who lose a parent.

It's hard to put a positive spin on this, but I just think that when the worst happens, the best we can hope for is that there are people around to help those left behind make sense of a terrible situation. I think that Child Bereavement Charity offers that, so please dig deep and donate.

That's all a bit sombre, I'm afraid, so on a lighter note, the picture above is of me in the running vest.  I'll be wearing while I plough through the 13+ miles of the half marathon that is the Great North Run. It's yellow and so tight it makes me look like a banana with nipples. I should have got a larger size. Oh well.

You can donate at my Just Giving page here. Thanks for reading this far.
Posted by Zak Avery at 07:03 0 comments