Is Saison the New Citra?

Lucky bastard Rob from Hopzine.com is in Rome, from where he posts this little video snippet. It's a great little snippet in lots of ways - on one hand, he's largeing it on holiday, and so he's already having a laugh at our expense. It's also great because he's responding with a video to something that he's read a few moments ago on Twitter - this conversation about saisons. We'll gloss over the fact that Baladin Nora isn't actually a saison - it's a spiced ale - the point is that Rob saw an opportunity and grabbed it with two hands, even though one was holding a brimming TeKu glass.

It's cool, it's now, and maybe this is the future of social media - people responding by video to things that they've seen a few moments earlier. This could be the birth of something big - rather than arguing in text, we could now do it with video, saving us the trouble of meeting up and getting drunk together. The misanthrope in me thinks that maybe this is the way forward - I recently had a request from Simon at Real Ale Guide for a 4-way Skype beer review. It didn't happen, but maybe a bit of video panel-drinking might be fun? I must give it a try - maybe it will be like going to the pub, or maybe it will be like sitting at home feeling slightly creeped out - only experience will tell.

Anyway, for me, the interesting question in that Twitter conversation is from Chris (@NorthernWrites on Twitter) - "Is saison the new citra?". It's a good question, coloured by Chris' unabashed dislike of what he sees as bandwagon-straddling me-too citra-infused pale golden ales. The short answer to this is, of course, no. But the long answer provides some insight into where the beer world may be headed in the next few years.

As International IPA Day draws close, what we are going to see is on August 4th is, I believe, a celebration of a style of beer that could do for beer what Australian wine did for wine in the late 80s and early 90s. IPA is a style that is easy to understand, easy to enjoy, and has the potential to draw more drinkers into the category. A citra-heavy IPA may not be the most sophisticated beer in the world, but damn, it's easy to enjoy, and I'm not sure how that can be a bad thing.

Contrast that open, easy-drinking appeal with the tart, tightly-wound, sometimes musty and dusty complexity of a saison, and it's clear that saisons are forever going to be marginalised. Saison is the riesling of the wine world - loved by those in the know and in the trade, but largely ignored by everyone else. Good riesling smells of diesel, wet stones and lime blossom. Good saison smells of hops sacks, old wooden spice racks and cellars.

Saison, like riesling, will always be a minority taste, but the future tastes of citra-laced IPA.

Good beer is something that needs to be savoured. There is something about the pace of modern life generally (or maybe it's my life in particular) that is somehow not conducive to really stopping and enjoying a beer. Either there are pressures of life intruding into a special beer moment, or, and perhaps this is a crueller irony, there is so much great beer available that you feel hurried to drink what you have in front of you so you can move on to the next rarity.

And modern life can play cruel tricks in other ways. It's true that technology can bring us closer together, allow us to network more effectively, but equally, when technology Goes Bad (capital G, capital B), it throws everything into total disarray. So it is with this video.

There's nothing wrong with the video, but the thing is, when I shoot one of these, I use the transfer, compression and upload time to write down some thoughts that the beer evokes. But for some reason, this little snippet got stuck on my camera, and wouldn't download from the camera. So rather than note down a few Wilde-esque witticisms about the beer, I spent a couple of hours swearing and fiddling with setting on the camera and the computer.

Consequently, the fine-grained stuff about the beer is all in the video, and these words are mere padding. 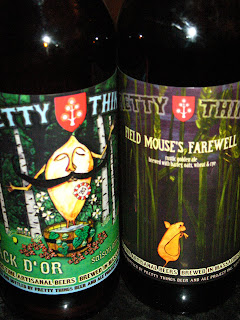 My Goodness, My Guinness!

You might be interested to know that as well as having written a piece about Guinness for The Independent last year, I've also just done a guest spot on Diageo's Guinness website. Feel free to compare and contrast them.

What I will say is that while draught Guinness may be the icon that everyone is familiar with, the Foreign Extra Stout is such a kick-ass beer that if you haven't already tried it, you really should.
Posted by ZakAvery at 23:05 7 comments