The Revolution Will Not Be Economised 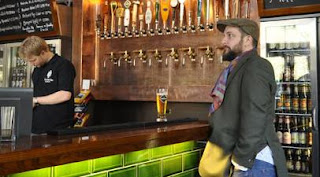 It's the annual awards dinner of the British Guild of Beer Writers this week, which for me is increasingly becoming an anchor point in the year, perhaps more so in beery terms than Christmas, birthday or New Year. The picture above was taken in the Euston Tap almost a year ago, the day after I won the Molson Coors-sponsored National Journalism category. I was having a beer, staring off into space, and wasn't aware of the photo being taken. That picture has also recently appeared in the online and print editions of The Economist. Leaving aside the tiresome cliché of beer making you fat (the caption to the picture prompted fellow blogger Nick Mitchell to point out that "1.4m influential businessmen, professionals, economists and thought leaders now think you're fat.") and the questionable fact that fancy beer has any snob value at all outside of a very small circle of people, it's a pretty decent summary of the situation.

That things are changing in the beer world isn't in doubt. What is surprising is the potential for growth that the niche end of the market is providing - indeed, it's where ALL the growth is at the moment. In a year that's seen me invest roughly two thirds of the value of my home in a warehouse full of beer, my senses have become acutely tuned to business side of what's happening at the bar (or more commonly, at the off licence), as well as what simply tastes good. I'm happy to report that it's not just a lot of noisome bloggers creating an illusion of a scene, it is actually going on in real life too. Of course, you knew that, because you're part of it, but the view from the other side of the fence, the bit that needs to pay the bills in order to feed the interest, is happy to confirm it: Call it what you want - craft beer, really good beer, beer - it's not just a bubble, or a phenomenon, or the flavour of the month. Sure it's niche, sure it's small, but at a time when the media is focusing on the bad (neatly summed up here), there's a part of the economy that is in growth, and that needs to be celebrated. Perhaps with a beer.

Image from The Euston Tap's website
Posted by Zak Avery at 19:51 9 comments

I've done a guest blog for that nice Velky Al chap over at Fuggled. Why not mosey over and have a look at it?
Posted by Zak Avery at 12:50 12 comments

Reject My Hand, And The Damage Is Done* 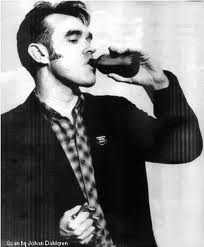 OK, so the link between the title and the subject is a bit tenuous, but it's one that elicits a real knee-jerk reaction in me every time. It's about the gap between the beer producer and the beer drinker, and specifically who fills that gap. At a point where the volumes consumed in the on-trade and off-trade are roughly equal, with trends suggesting that the off-trade will eclipse the on-trade in the next few years, who is connecting producers and consumers?

You'd be forgiven for believing that the supermarkets are king when it comes to beer. Certainly, nobody tries to compete with them when it comes to commodity beer. They have a stranglehold on that market, although interestingly, very few people talk about the time when Tesco delisted Carling due to a price rise, and then caved in and relisted it after a month of people saying "what do you mean you don't stock Carling?" (see here, for example). Whatever you may think about Molson-Coors, it takes some guts to tell a notoriously tough-dealing supermarket that you're not going to play ball with its pricing policy.

Who is connecting brewers and drinkers these days? The big book of BBPA stats that plopped onto my doormat the other day suggests half of it is the on-trade, and half off-trade (50.9% vs 49.1%, if you want to be picky). Now let's assume that 80% of the beers in the off trade are volume brands, that leaves 20% of the volume that might be said to be premium bottled beer. The more alert amongst you will already have noticed that this is only around 10% of the market, but crucially, this is where the growth and the value is at present.

But aside from that, why would you expect supermarkets to get this sort of thing right anyway? Surely if you're looking at a 10% market share (and if you're talking about 'craft' beer, my hunch is that you're looking at less than a 1% market share), this is the realm of the specialist, and when you talk about bottled beer, you're talking about specialist off licences. So when I see articles like this well-intentioned piece on the Guardian's "Word of Mouth" blog, which in turn references Mark's piece about Tesco's epic beer fail, it makes me want to slam my fingers in a drawer, because at no point does anyone say "of course, you'd be better off seeking out a local independent off-licence, which will have a better range and better-informed, more passionate staff". And while I rarely draw comparisons between beer and wine (which I think is like comparing meat and cheese - THEY ARE DIFFERENT THINGS!), I will say that it's almost taken for granted that you will get more interesting wine at an independent wine merchant than you ever will at a supermarket.

So why is everyone acting so surprised that it's any different for beer? Sure, I have a vested interest. I declare it over there, on the right - a shop, a mail-order service, and a wholesaling business. It's what I do, and I'm currently doing it to the detriment of what I vainly refer to as "my career as a writer", because it's something that I believe passionately in. The simple fact is, there's an amazing network of great beer off-licences in the UK that simply don't get the respect they deserve. From relative newcomers like Eddy at The Beer Boutique in Putney and Anthony at Alexander Wines in Coventry, to stalwarts like Muree at The Offie in Leicester and Krishan at Stirchley Wines in Birmingham, Drink of Fulham, Trafalgar Wines in Brighton - the list could go on (and maybe it should - shall we start a list?). Sure I supply those guys with some of their beer, but that's not why I'm writing this. I'm writing this because unless those businesses get the support they need, they won't be around for ever.

So don't be surprised that the supermarkets don't get it right. By and large, they don't sell the best of anything - that is still the domain of the specialist. The interesting stuff happens in that tiny 1% of the market - that's the bit we're all interested in. Support the specialists. Use them or lose them, folks. To return to the title of the post: "Reach for my hand, and the race is won. Reject my hand, and the damage is done"

*with apologies to Morrissey
Posted by Zak Avery at 21:38 17 comments

Pissed Up On Booze

I went out last week. That might not sound comment-worthy, but I don't get out nearly as much as you might think. A double-handful of us went to the local Aagrah for curry and birthday celebrations. It was pretty decent, although I'm no expert - for all I know, it may be the Nando's of the Indian subcontinent, although I actually don't mind Nando's either.

The pre-dinner drink was a Sierra Nevada Pale Ale, not at Aagrah, but across the road at a more hip bar. Did I want a glass? Actually no, I'll skip it - what the hell, I know what it tastes like, and it'll stay colder longer in the bottle. We go to Aagrah, and the person doing the ordering at the bar makes the "sorry, I dont think their beer selection is up to much" face - it's a face I see quite often. I find myself saying "Whatever - Cobra I guess".

The Cobra comes in big bottles, with a pint glass. We sit down, start drinking, chatting and catching up. The beer is totally incidental, but also paradoxically integral to what we're doing. Lager and curry, a cliché, but then we're not trying to prove anything. The table has gravitated to guys at one end, women at the other, but the only real difference is that the women are swearing less, and are drinking Cobra from wine glasses. It's not about the beer.

I end up eating Lahore machli - spiced fried fish - and fashioning myself a kebab for the main course - basically a double portion of seekh kebab, two chappatis and a bowl of special raita. I'm sat in a nice restaurant, with a tablecloth and a cloth napkin, eating kebabs and drinking lager. And it's totally brilliant.

Is it really necessary to live the craft beer cliché every time you fancy a beer? There are some things that I try not to compromise on, like free-range meat, for example, although ironically, I'm sure that the meat I ate that night was as industrially produced as the beer. But then the myth of free-range, organic food for everyone is just that - a myth, a pipedream, an ideal. As we see American breweries pulling out of not just the UK market, but even inter-state distribution deals, you have to ask yourself if the 'craft' beer market, although in rapid expansion at present, is actually going to become harder to access by virtue of its success.

But back to the point. I had a load of ordinary lager, a couple of kebabs, and the company of friends for a few hours, and it was the most fun night out I'd had in ages. Would it have been a better night if we'd had better beer to talk about?
Posted by Zak Avery at 19:37 13 comments