I caught the first of Grayson Perry's Reith Lectures on craft beer this week. They're broadcast on BBC Radio 4 (link), and the first lecture was largely to do with how we actually define craft beer.

Well, I'm twisting his words slightly. He was actually talking about art, but really all the arguments he deploys are equally applicable to craft beer. How do you define it, what it is, what it isn't, and who gets to make those decisions. Who gets to buy and consume it. Really, it's interesting, you should listen to it, just substitute the word "beer" every time you hear the word "art"

That's the good bit of the post over. The rest is about beer/craft beer and quality control.

I still think that craft beer is "a thing", but I'm still not sure that it's anything to do with beer. At IndyManBeerCon last year, I was part of the panel that James also sat on, the panel he mentions in the opening paragraph here. It's my recollection that we did actually talk about what craft beer was. Being the contrarian, I talked about craft beer in terms of what it wasn't (link here), and how the whole movement was about trying to define oneself in opposition to the mainstream. Hey, I'm a failed academic. Maybe it was a bit fine-grained, but James very kindly told us all that we'd missed the point, and showboated about Blue Moon for 10 minutes. Sheesh, if that's not defining yourself as the other, I don't know what is.

IndyMan is the dream of craft beer made flesh. I can't pretend that I get to many beer festivals, or even many beer bars these days, but IndyMan has a special place in my heart. It is everything that is great about Britain rolled into one. Britain has a reputation for being an early adopter, which might explain the endless reinvention and global domination of (for example) fashion and pop music. Couple that with a celebration of history, and a long weekend of craft beer in the crumbling splendour of a Victorian swimming baths couldn't be any more British.

I do wonder, though, if an idea as brilliantly conceived and expertly executed as IndyMan is almost done a disservice by some beer (craft beer, by definition, I guess).

At the Great British Beer Festival this year, I set myself a challenge: no beer that I'd drunk before, and a decent selection of stab-in-the-dark beers that I knew nothing about as a way of trying to gauge a cross-section of the market. It wasn't an entirely enjoyable experience, with dull, poorly conceived and/or badly made (or all three) beers easily found, and mostly from brewers that would, by any definition put forward, be classed as craft brewers.

While I didn't set any such criteria at IndyMan, I was surprised to experience a similar set of disappointments. Phenolic, astringent golden ales. Beer that smelled of freshly mashed grain. Beers that had a peculiar quality that I could only describe as "the opposite of drinkability". This isn't peculiar to IndyMan, or to craft beer, but there are a group of breweries who have quality control nailed, and rarely disappoint. They get my money every time. The others, not so much.

And what of the drinkers? One brewer reported to me having had a conversation with a craft beer enthusiast who was loving the butterscotch edge in their beer. It turned out to be diacetyl, although the drinker had never heard of it, and was adamant that they were enjoying it. Fair enough, for that drinker it was more important to be drinking craft beer than to be understanding it. For me, it's the other way around, but like I said earlier, I'm a failed academic.

Is quality control important? I think it's the one major challenge that faces beer, craft or otherwise. It's the elephant in the room. Having a trade body to "protect" craft beer (whatever that means - I think really it means a brewer-funded body to promote themselves, in the way that the Brewer's Association does in the US) is secondary to some way of ensuring that when people do eventually try beer (craft or not), it's a positive experience.

Put it another way: I'm not interested in your credentials if you've paid for them. Let the beer do the talking for you. It's part of the reason that I've worked in this industry for so long, because I genuinely believe that tasty, well-made beer is a life-enhancing experience, in the same way that good food is.

Email ThisBlogThis!Share to TwitterShare to FacebookShare to Pinterest
Labels: craft beer, quality control, the other 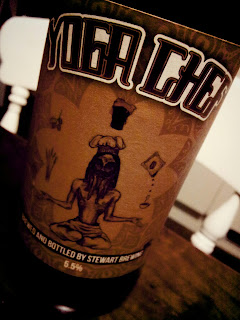 Like the changing seasons, my tastes change periodically. One of this year's surprises has been my reaction to stout. After months and months of pale hoppy beers, smoky stouts have assumed an oddly acrid, unpleasant edge. Doubly so coffee stouts, with their characteristic "touch of ashtray" notes. Lord knows when I will revisit that style.

So my heart sank a little bit when I held up this bottle of Stewart Brewing Yoga Chef to try and get a sense of what I might be in for. Dark beer, humph, and humph again. It sat rejected on my desk for a few days. Then, sod it, the weather changed, and suddenly, so did I.

A really good, interesting autumnal beer, from a brewery who have consistently impressed me this year.

(Stewart Brewing sent me this bottle for review)
Posted by Zak Avery at 10:50 4 comments

Portrait Of A Brewer ~ An Eye For Detail


Portrait of a brewer from Paul Bates on Vimeo.


I'm sure you've seen this by now. It's a really nice short film about one man's relationship with brewing, his inspirations, thought processes, and take on what brewing is. At a surface level, it's nicely shot, showing some of the tools and processes of the brewer's craft.

It's wonderfully calm, miles from the shouty "look at me and my bulging hopsack, WOOF!" sort of approach. It eschews the need to emphasise passion as a reason for doing something. If you spend your life doing something, that passion doesn't need to be underlined.

Dig a little deeper, listen to what's being said, and you get a feel for why brewing can captivate people, and why it can inspire such fervour (David touches on that theme too here).

Pay proper attention, and you'll notice the fine details. Like the fact that Andy Skene is pouring Pitfield beer at the end, and that there is a long tale behind why he's doing so.
Posted by Zak Avery at 20:12 1 comments