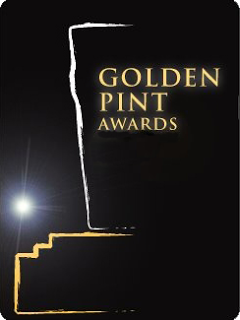 And so without further, or indeed any, ado, let's kick off with the first category, Best UK Draught Beer.

The winner of this category impressed the judge with its fusion of British pale golden ale and utterly bonkers new world hop overload. It is a beer that is so compellingly drinkable that the judge was compelled to drink several pints of it after a perfectly nice day out at the National Winter Ales Festival, falling asleep on the train home and having to get a £40 taxi from York back to Leeds. Bonus points go to the brewer of this beer for turning up at the Friends of Ham Smoked Porker / Quantum Tap Takeover and just drinking halves of it all night, ignoring everything else on offer. Yes, the Best UK Draught Beer 2012 is Magic Rock High Wire (cask version). Runner up is, well, pretty much everything else compared to High Wire to be honest.

As someone wholeheartedly committed to the death of the on-trade by running a successful bottle-wholesaling and retailing operation, the Best UK Bottled or Canned Beer is, of course, a category close to my heart. Unlike the previous category, competition here has been hard fought. Honourable mentions go to Oakham Green Devil, The Kernel Table Beer, Red Willow Ageless and, er, Magic Rock High Wire. Sadly, one beer has pummelled all of these into submission, just like Chuck Norris, an icon of uncompromising uncompromisingness held dear to the brewer of the winning beer. Yes, I'm talking #carnagenoir, James Kemp and Buxton Imperial Black India Pale Ale. Not only redefining "ruinously drinkable", but delivering a karate chop to the windpipe while it's at it.

The award of Best Overseas Draught Beer goes to a single pint of Ska Brewing Modus Hoperandi that I shared with Andy Taylor (@tabamatu) on the Leeds Open It night out. You can read a summary of that night here, but really, it's all summed up in this tweet.  Best Overseas Bottled or Canned Beer would have to be Southern Tier Iniquity, an imperial black ale that I bought to sell to people, and then ended up buying back from various shops at full retail value when I realised it's sheer brilliance.

I've no idea what Best Overall Beer means, but out of the beers above, I honestly couldn't choose between High Wire and Imperial Black, so over the Christmas holiday I intend to make some sort of imperial black 'n' tan out of them to see what happens.

Equally hard for me to make sense of is the Best Pumpclip or Label category. Red Willow, Moor Beer Co., and Bristol Beer Factory all look great on the bar or on the shelf, as do Marble. While it's easy to pick out a favourite beer, picking out the Best UK Brewery is a much harder task. So hard, in fact, that I'm not going to even try. The bar is set too high to split between them. And best - best at what? Making beer? No, no, I won't have it, this category is a NONSENSE! That said, the beers that I tried at Brodie's a couple of weeks ago (coupled with the odd bottle over the course of the year) were a real eye-opener - a brewery making great beers across a variety of styles, international collaborations (Mikkeller AND Three Floyds). I've not tried enough of their beers to claim them as a 2012 favourite, nor are they the best of 2012, but favourite new (to me) brewery, for sure. I'm rambling now, sorry. Argh, similarly, Best Overseas Brewery. At Borefts Beer Festival, I was blown away by Mikkeller and Jester King, so pick one, settle down, and shall we move on?

I don't get out much, so I'm not one to judge Pub/Bar of the Year. Seeing North Bar turn 15 this year was brilliant, and seeing Friends of Ham emerge blinking into the sunlight like an ickle faun was also a beautiful moment. No such qualms, however, about Beer Festival of the Year - hands down it was Indy Man Beer Con, which in my humble opinion was a world-class event. Or maybe it was Borefts Beer Festival. Hmm, I thought I had it nailed there. Oh well.

Voting for Supermarket of the Year is like voting for Best Cultural Apocalypse - whenever I buy beer there, I can feel the ghost of Hilaire Belloc tugging at my collar, whispering "From the towns all Inns have been driven: from the villages most.... Change your hearts or you will lose your Inns and you will deserve to have lost them. But when you have lost your Inns drown your empty selves, for you will have lost the last of England". Supermarkets are great for picking up decent beers at knock-down prices, and while I'm always disappointed to see brewers getting locked into volume production contracts and then bleating about how there's no money it, but they have to continue at that scale otherwise they won't be able to do anything, ever, I have to congratulate Morrisons for managing to have Worthington White Shield on sale at £1.40 for ages - congratu-fucking-lations to everyone concerned for devaluing an icon of British brewing. Still tasted great though.

Both Independent Retailer of the Year and Online Retailer of the Year are a bit hard to call, not least because of my vested interests in each, so what the hell, I'll say Beer-Ritz in Headingley and BeerRitz.co.uk, just because I co-own them. And also because brilliant people who really give a shit and love beer work at the shop. That's a good enough reason, right?

As anyone who has seen me doing my "jazz-hands are the hops, clog-stomping is the malt" interpretive beer dance, writing about beer is like, er, dancing about beer. This year I've read a lot of Stan Hieronymus, so I'm nominating Brewing with Wheat as my Best Beer Book or Magazine. His prose is always elegant and concise, with enough information to provoke further thoughtful investigation rather than give definitive answers. He's sort of Yin to Garrett Oliver's Yang.

Much as I'm loving the new eBuzzing nonsense algorithms (so much more random than Wikio!), I still read through almost everything posted in my blog roll (drop me an email if you'd like to be included). Mainly for providing as constant stream of literate and engaging beer notes, tempered hugely by being great company at Borefts, and insisting that 9pm on Saturday night was "doppelbock o'clock", award for Best Beer Blog or Website award goes to The Beer Nut. Best Beer Twitterer doesn't make any sense - it's like best brewery - best at what? Favourite? What is this, a popularity contest?

Popularity is what Best Online Brewery Presence is all about. Or is it an unpopularity contest? Either way, BrewDog manage to butt into my week fairly regularly, and at least a quarter of the time I have to remind myself to step away from the computer and put all that swearing back in the cupboard at the latest piece of countercultural froth they've managed to concoct.

Food and Beer Pairing of the Year was at the launch of Melissa Cole and Outlaw Brew Co's Mad Hatter Jasmine IPA, mainly because the beer was great and the food was ONLY THE BEST PORK PIE I'VE EVER EATEN!!! Quality always shines through.


DISCLOSURE - I buy and sell beer for a living, and work with almost all of the breweries mentioned above. I'm pretty sure my integrity is intact, your opinion may differ.
Posted by Zak Avery at 23:07 12 comments