Our latest Saturday tasting was a few weeks ago - we're a bit slow at getting this video up owing to various bits of lurgy and absence - but we were very pleased to welcome Ilkley Brewery to the shop for the afternoon, They brought two beers, Notorious F.I.G., which is a 7.5% fig dubbel designed to pair with cheese, and the brilliant Lotus IPA, which is a burst of pithy grapefruit freshness delivered in a very clean, crisp golden IPA.

Notorious F.I.G. is certainly the more complex beer, realistically needing a slab of cheese to play against, but the Lotus IPA was probably the star of the show, providing a big explosion of grapefruity hop character against a simple pale malt background. There's something incredibly satisfying about the burst of pithy citrus being delivered in a cheeky little cold can too - I sneaked a sip at the start of the video, and the clean, zesty coolness took me by surprise.

If you can't get to the BeerRitz shop in Leeds, you can buy their beers here.


Our next tasting is for the launch of Roosters Brewing Co's new session IPA, 24/7. It's a brilliantly fruity and pleasingly bitter 4.7% of golden loveliness, which should bring a lot of happiness to a lot of people over the summer. We'll also have the world premier of Highway 51 in cans, a 3.7% riot of Mosaic, Centennial and Rakau hops. Come along to BeerRitz, 14 Weetwood Lane, Headingley, LS16 5LX on Saturday 29th April, 1-4pm for free beer, badges, blather, banter and other things beginning with B. 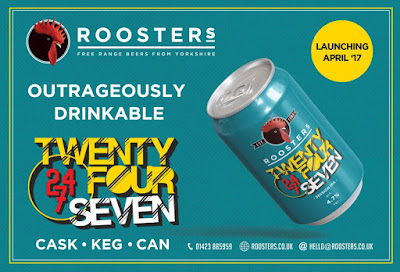