Beer Is For Everyone, Right?


Some of you may know who Chad is. Whatever you may think of video beer reviewers (and I speak as one who has been both praised and villified for my activities), Chad is perhaps one of the best known. I personally think it's a pretty harmless activity - you drink a beer and say whatever comes into your head. If it's about the beer, bonus. Nobody's trying to be the new Michael Jackson, it's just a bit of fun.

What has really put my nose out of joint lately are the comments left on my Youtube channel here. The commenter seems to imply that Chad isn't a worthy recipient of a bottle of The Kernel Suke Quto Coffee IPA that I sent.

This post isn't really about Chad, it's about the idea that you have to reach a level of 'beerdom' in order to be allowed to drink certain types of beers. Sure, there are some beers that benefit from a little explanation, most sour beers and rauchbiers being the primary examples. But surely beer is a democratic, egalitarian drink that can be shared by everyone? Or do you disagree?

I've got to be honest with you, this desk job is taking it's toll. Instead of lugging cases of beer up and down stairs endlessly, I'm sat down most of the day, on the phone, buying beer, selling beer, and making beer-related plans. And frankly, I've put on a bit of weight. Not a lot, but enough to make me think 'hmm, if you want those hideous shirts still to fit you at GBBF, then you'd better do something about it, chunky'. While it may be bad PR for beer to say that it makes you fat, it makes you fat. Anything worth consuming will make you fat if you consume enough of it. I'm not going to go on a bloody detox, but I am going to exercise regularly and try to drink a bit less.

Twenty minutes on the cross-trainer at full resistance is enough to make me breathless, sweaty and leave a pleasant blank hole in my mind where all the stresses and strains of the day were just a few minutes ago. But of course, nature abbhors a vacuum, and thoughts tend to float in. This evening's thought was:

"If cask and keg are better suited to different styles of beer, do any brewers vary the recipe of their beer to suit the mode of dispense?"

I'm aware of brewers making their beers stronger for bottle, but what of cask vs keg? Or are cask and keg seen as interchangeable?

Answers in the box below, please and thank you. 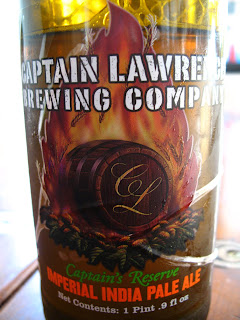 Me and the Mrs used to be fans of tattoos. We were really close to getting massive, full-sleeve ones done, and then, like a lot of people, we didn't get around to it. It wasn't that we chickened out, we just lost the momentum for getting in it done. In idle moments, I still fantasise about getting a huge tattoo done - a massive hop cone on my back, maybe, or even on my stomach so that it will gradually change shape as I age and succumb to middle-aged spread.

I only mention this because when I looked at the label to this beer - a flaming wooden firkin - my immediate thought was: "Damn, that would make an excellent tattoo". Not that I'll ever get it done, but it was a surprisingly powerful reaction.

Captain Lawrence Imperial IPA is a big beer, but surprisingly restrained. There a good, woody, piney, tropical-fruity hop character to the nose, and a faint hint of something that I struggle to grasp in the video - something pungently spicy, but earthy at the same time. On the palate, the 8%abv is hidden very well - there's a faint warmth on the gums and in the throat, and a telltale alcohol slickness to the swallow - but otherwise, this beer qualifies for the "ruinously drinkable" description. The pale malt on the palate offers a big, chewy sweetness in the mouth that is neatly counterbalanced as the bitterness kicks in after the swallow. It's a class act, and although it doesn't pack the absurd levels of dry-hop character that (for example) the new recipe Punk IPA does, this actually enhances the experience for me, giving it a smooth drinkability rather than a shrill, attention grabbing shriek.

This is easily the most beer-geeky thing I've ever done. I'm not sure that I'm totally comfortable with it, and given how bad a beerswap buddy I was, I can't imagine that anyone will be rushing to do it again with me. I took ages to mail my parcel, and longer still to do this unboxing video. But hey, it's done now, and here's the result.

Part of the deal is that I video review these beers. I'm so rusty at talking to camera that I fear I might not do them justice, but that's not going to stop me. What I am sure about is that the reviews are going to be pretty brief, allowing me more time to sit on the leather sofa in the corner of our living room and savour them. Perhaps I'll do before-and-after videos, cutting back to me after having drunk a bomber of really strong beer, a little like those early recordings of Aldous Huxley experimenting with mescaline and LSD:

"It's been 40 minutes now since I finished that bomber of Southern Tier Gemini. I received this beer by chance, and enthusiastically drank it by choice. Those aromas of the hops - what a labyrinth of endlessly significant complexity! And the texture of the smooth malt - how rich, how deeply, mysteriously sumptuous. Are there any chicken wings left?"

I don't know what else to say. My name's Zak, and I'm a beer geek. The revolution is dead. Long live the revolution.

Many thanks to Chad of Chad'z Beer Reviews for the beers, and the gentle bullying that finally got this whole thing to happen. If any beer geeks would like to get together in Leeds (or elsewhere) and try them, do let me know.

I'm delighted to present the Wikio rankings again this month, if only because it means that everyone is guaranteed to pop in here for a sneaky peek. So before I reveal the rankings, let me abuse that position by saying a few words about the peculiar CAMRA-related argument that's been raging on the blogs for the last few days.

I'm amazed at everyone's reactions to that speech by Colin Valentine. I'm amazed in so many ways. Firstly, I'm amazed that Valentine felt moved to not only comment on the blogging scene, but that he felt so hostile about it. The reason I'm surprised is that overall, beer blogging is still a pretty niche activity, as is drinking 'craft' beer, and I'm amazed that he felt threatened enough to comment.

I'm not saying that I don't enjoy the 'craft' beer scene in the UK. Hey, I make my living from it, and believe me, I don't do what I do for the money, I do it because I'm fascinated by the seemingly endless variety of tastes and textures that beer offers. But do I think I'm any more important because of that, or for having written a book, or for having won a few awards? Of course not. I'm immensely proud of them, but I'd like to think that I've always had a slightly inflated of opinion of myself that was merely reinforced by these achievements.

I'm also amazed by so many bloggers' complete misunderstanding of what CAMRA is, and how it works. CAMRA is a consumer organisation, and is composed of members who guide the direction that CAMRA goes in. Even if you ignore the fact that CAMRA is de facto about promoting cask ale, everyone seems to have missed the point that CAMRA isn't a top-down organisation. Colin Valentine isn't some Dr. Evil at the head of an organisation, issuing edicts for his minions to follow, he's a mouthpiece for the organisation.

CAMRA is directed by its members, and the sort of people who turn out and vote for motions at CAMRA meetings are actually people like you and I - people who care passionately about something. Sure, the things we and they care about are worlds apart, but you know what? That's life. Not everyone will agree with everything you say. And saying 'CAMRA needs to change' is to fundamentally miss the point. CAMRA's never going to change unless its members want it to change, and if you want it to change, then join, be active, campaign, educate, but just don't expect to do that only by blogging. While electronic media may be a great force for communicating opinions, removing the publishing machine between the author and the reader, that doesn't mean that blogging is a silver bullet in educating people about beer. Preaching to the converted is easy.

Personally, I thought what Valentine said was pretty mean-spirited, and in an ideal world, he'd be censured by the membership. Curiously, the membership haven't called for him to be removed from office, perhaps because they either (a) agreed with what he said, or (b) weren't really listening that closely and don't really care. I'd warrant that it's mostly (b), with a bit of (a) derived from the way that he framed his comments and equated keg beer with craft beer. He's talking bollocks, of course, and should be taken to task about it. By who, mention no names, but follow my eyes... [*looks at the BSF bar*]

So what do you do? Publicly moan some more about how shit CAMRA are? Great work. You poked the sleeping dog and it bit you. Deal with it, but don't moan about it to me, because I'm not interested. Colin Valentine made some noisome remarks, but CAMRA didn't. If any of the broadsheets were one tenth as receptive to new beer writers as What's Brewing and Beer are, and paid as well or as promptly, I'd be delighted. And if the top 100 beer blogs had one tenth of the audience that What's Brewing and Beer has, I'd be delighted. Funny how nobody ever comments on what a great magazine Beer has has become in the last couple of years. In terms of nurturing new talent, and giving bloggers a 'real world' outlet, it's unparalleled. Which brings us neatly back to beer blogs, which is why you're all here, and how I've tricked you into visiting.

So anyway, here are the Wikio rankings for May. Remember - play nice, love each other, and drink good beer in all its many forms of dispense.

Ranking made by Wikio