Sucking Up A Social Class: Some Further Observations

As Boak and Bailey point out on their blog, there is a lot of debate at present around "craft" beer and snobbery. I was going to post on their blog about why this is, but then realised that it probably warranted a post all of its own.

There are a couple of things going on here. One is the conflation of money and class, a peculiarly American concept. Could it be that the "craft" beer movement, as well as drawing beery inspiration from the USA, has also imported a load of social values along with it? There are a lot of naysayers who object purely on principle to paying £10 for a bottle (or a pint) of beer. I'm not exactly sure why that is - it would be easy to say that it's jealousy, but I think there's something more fundamental going on. I think it's the idea that there is something posh, snobby, pretentious - call it what you want - about spending your money on fancy, rare or expensive beer. Just as I'd defend anyone's right to spend their money on anything that they want (as long as it isn't criminal, in the legally defined sense), I'd also defend anyone's right to express their discomfort about it. But that's just what I think - I'd love to hear your views on that idea.

Tied into this is the idea that people who buy fancy, rare or expensive beer are doing so because they somehow think they are better than people who don't. For this to be true, there would have to be a substantial amount of blog content denigrating the sort of beers that "only" cost below £3 a pint. But I can't find anything, anywhere that says anything like that, BrewDog's publicity machine aside, of course.

Ah, the B-word. Has BrewDog stance on "industrial" beer become so well disseminated that now people are conflating their views with that of the "craft" beer movement as a whole? Or are they closer than "craft" beer lovers would like to think? Or is it really simply about money and snobbery?
Posted by Zak Avery at 08:01 39 comments 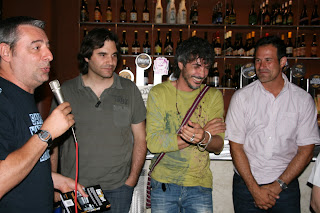 Everyone loves a list, don't they? A "Best of..." list is a great way of condensing information, although of of course there is a lot of detail and nuance lost in this approach, and anyone not appearing on it might feel slighted.

Best UK Draught (Cask or Keg) Beer Magic Rock High Wire
Best UK Bottled or Canned Beer Buxton Brewery Axe Edge
Best Overseas Draught Beer Odell IPA
Best Overseas Bottled or Canned Beer Anchor Porter - a hugely underrated beer, in my opinion
Best Overall Beer Magic Rock High Wire
Best Pumpclip or Label Magic Rock
Best UK Brewery The Kernel - defining 'craft' without ever thinking too hard about it
Best Overseas Brewery Mikkeller (yes, I know he hasn't got a brewery, but you know what I mean)
Pub/Bar of the Year I don't get out much, but The Euston Tap is a repeated draw when I'm in London
Beer Festival of the Year I've not been to many, but GBBF is an obvious call
Supermarket of the Year Haven't shopped widely enough to have an opinion
Independent Retailer of the Year modesty forbids - has it only been 9 months....?
Online Retailer of the Year modesty forbids
Best Beer Book or Magazine not read enough to choose
Best Beer Blog or Website Adrian Tierney-Jones at Called to the Bar
Best Beer Twitterer Simon H Johnson
Best Online Brewery presence Magic Rock
Food and Beer Pairing of the Year couldn't choose, sorry.
In 2012 I’d Most Like To… get back out to the USA, and judge at the World Beer Cup
Open Category: You Choose Best commodity/craft crossover beer - Worthington White Shield. I can't think of a single other beer that has got such a great lineage, tastes amazing, and yet you can still pick up for a couple of quid in most UK supermarkets. Garrett Oliver's maxim that "you can buy some of the best beers in the world for the price of a double latte at Starbucks" has never been more true.
Posted by Zak Avery at 14:21 7 comments

Hi, My Name's Zak, And I'm A Hypocrite 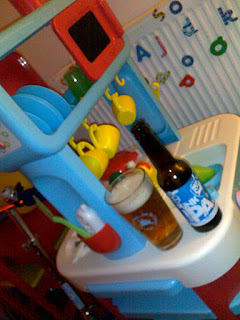 "Bless me, Father, for I have sinned. It's been 1,716 weeks since my last confession, and in that time I've been guilty of the sins of lust, gluttony, greed, sloth, wrath, acedia, lust, envy, vanity and pride"

"You said lust twice, my child"

I like to think that I'm as even handed with "ordinary" beer as I am "craft" beer. A nervous glance back through my recent posts (did I only post once in October? That's sloth and acedia for you) suggests that although I do post about rare and hard-to-find stuff, I also post about easy-to-find stuff too.

However, I have to admit to having strayed from the path recently. I live a 3 minute walk from a Morrisons supermarket, and the other evening, having just driven home from a warehouse with around £100k of great beer in it, I discovered that I didn't have any beer that was appropriate to my mood. I didn't want any homebrew, any Fuller's Gales Prize Old Ale, any Stone Old Guardian, any Birra Del Borgo KeTo Reporter, any Hair Of The Dog Adam, any Hardknott Granite (Batch 1), any Williams Bros Fraoch 20, any Thomas Hardy Ale. What I wanted was a couple of bottles of BrewDog Punk IPA. And Mozzers sells it.

What do you think? Is the chase part of the fun? How hard should you have to look for "craft" beer? Is it any less "craft" for being in a supermarket?
Posted by Zak Avery at 20:55 24 comments