A Night Less Ordinary with @friendsofham 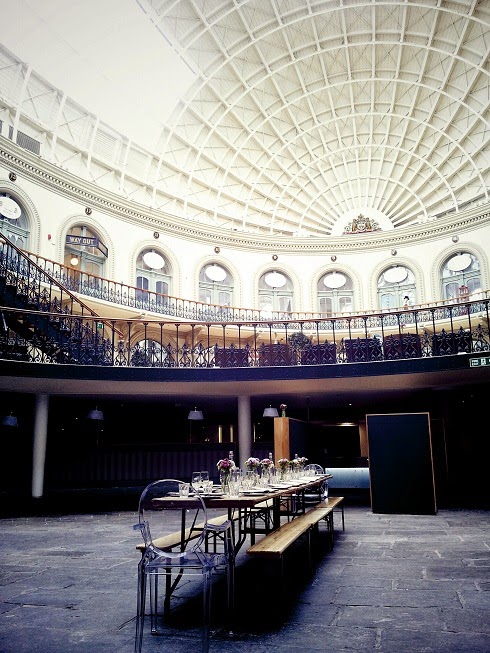 So, who would turn down the opportunity to host two consecutive nights of beer and charcuterie at one of Leeds' most iconic buildings, the Corn Exchange? No, me neither. Thanks to Friends of Ham, 40-odd people (or 40 odd people, depending on who you sat next to) got to taste some unusual charcuterie paired with unusual beers.

The opener, ventrecina del Vastese was paired with a reception beer, Wild and Fyne's Cool as a Cucumber. To be fair, most people had finished the beer before the meat arrived - first beer of the night, glug and it's gone - but the fiery poke of the cured pork was gently soothed with the cucumber and mint session saison.

The air-dried mutton was lucky enough to be paired with Kernel London Sour. While the mutton was pretty lean and clean, that tell-tale note of lanolin that hangs around mutton was washed clean and crisp against the Berliner weisse styling of this beer.

When you agree to host an evening of "challenging" food and beer, you have to accept that not everything is going to be to everyone's tastes. The smoked lardo from Black Hand in Hackney had a good depth of flavour, but the short cure meant that it perhaps tasted and felt a little too much like what it was. Happily, Williams Bros/Heather Ale Alba Scots Pine Ale did a good job of restoring balance, giving a bold sluicing of sweet, piney goodness to challenged palates.

Do you like black pudding? Do you like chorizo? Then you'll love Black Chorizo! It's as simple as that, a perfect cross between two perfect types of sausage. Only challenging really if you're a bit squeamish about eating blood, although having typed that, it seems a perfectly reasonable thing to be squeamish about. This was paired with Fantome de Saison, which differed hugely from bottles I've had in the past by not smelling like a pair of dirty goats copulating in an abandoned dairy. It was soft, redolent of strawberries and mangoes, and quite ethereal. Not challenging, but certainly less ordinary.

Magret of duck, cured and smoked over beechwood, was very easy to like, and my favourite charcuterie of the night. Happily, it was paired with Siren Americano, a beer which I don't have the full story behind, but could quite happily be described as an American MilDIPA. The nutty malt and coffee wove beautifully into the fatty, unctuous duck before oodles of hops show up to kick the shit out of you. 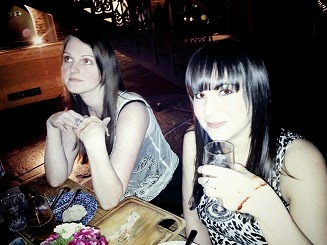 Guanciale is whole cured pigs cheek. Being a lover of this particular cut when you buy it prepared from a butcher, I was excited by this, but the reality was a bit much even for me, the whole cheek being a lot more fatty and challenging than the little nugget of muscle that most carnivores think of when they see the word "cheek" on a menu. The cure was good, but hadn't really masked the fact that pigs cheeks spend a lot of time being buried in the soil, rooting through all manner of things that you don't want to think about. I can see it working in a carbonara though, as knowledgeable host Cat from FoH explained that it was this cut, not pancetta, that was the classic carbonara ingredient. But that's sort of the point of these events, to be pushed outside of your comfort zone a bit. Happily, judicious application of Duysters Tuverbol, an unlikely blend of a triple and lambic from Drie Fonteinen, acted as cleansing balm to this. The picture here shows two guests modelling the guanciale - apparently, you do this to warm it up and improve the texture.

Just to show I'm not a total wuss, the final charcuterie was my favourite. Salamella al fegato is a sausage of heart and liver cured with orange peel, fennel and vino cotto (boiled wine must). It's the sort of thing that I happily spread on toast for breakfast when I'm in Spain, much to the disgust of my family. It's a bit haggis-y, and so what better accompaniment than a spirit, albeit a freeze-distilled one: Watt Dickie from BrewDog was the logical conclusion to a challenging evening, and actually a pretty decent foil to the ofally nice salamella del fegato.

Props go to the whole Friends of Ham posse for conceiving of the night, finding an amazing venue, and getting me to host it. And special thanks to everyone who came and ate, drank, and was merry.
Posted by Zak Avery at 21:28 3 comments