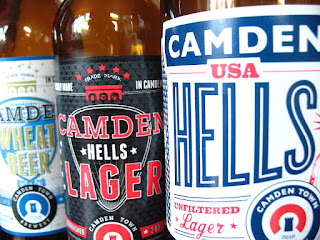 The weather turns warm and sunny. The sap rises. I want something different, something clean and fresh, something other than big chunky beers. Magically, a selection of beers from Camden Brewery, and a mini-cask of Sharp's Spring Cask Pilsner arrive at my desk, as though the beery gods have sensed a change in my mood, and can tell that I need placating a bit sharpish, matey.

The beers from Camden are good. The Hells Lager (apparently a stab at combining the helles and pils styles) works well, being a well-made lagery sort of a lager - clean, crisp and moreish. This is the beer you get if you go into a bar and ask for "a beer" - well-executed, transparently flawless, drinkable, bittersweet. The unfiltered version ups the ante a bit further, and the Unfiltered USA Hells slams down a hand of four aces and scoops the pot into its lap - zesty, slightly yeasty, but carrying that unmistakable hoppity-skippity of an unfiltered lager. It's just more alive, somehow.

Sharp's Spring Cask Pilsner is an essay in elegance. Brewers talk about having nowhere to hide when you brew a lager, but lagers such as Camden's have a distinct robustness when compared to this lager-ale hybrid. The Crafterati will hate it, even though it's a distant relative of Monsieur Rock. It's the opposite of an edgy, boundary-pushing beer, so ethereal as to be pummelled into submission by a full-bodied, unfiltered lager like Camden's. It's there, it's gone. Honey, herbs, lemons, fresh air and dewy grass. Can I have another please?

The Spring Cask Pilsner was such a gentle waft of spring breeze across the palate that that it got me thinking. Last night, I drank a Kernel Brewery Double Citra, so full of mangoes and passion fruit that its 9%+ abv slipped by unnoticed. It was the concentrated fruity essence of a hop that has been bred to be the concentrated fruity essence of hops. Have my doors of lupulin perception been pushed permanently ajar by the repeated ingestion of Double Citra, Double IPA, Imperial Black Ale? And more importantly, if they are, should I even care, or should I just yield to it and accept that the past is a different country, and things are going to be different from now on?
Posted by Zak Avery at 19:49 13 comments

The Beer Academy - How To Judge Beer

We all love beer. You love beer, I love beer, and that's a beautiful thing. Every time we take a mouthful, we evaluate it to some degree, either an idle "mmm, tasty" or an analytic "sulphurous, astringent", to a meaningless "4+2+3+4+3=3.6".

If you blog about beer, and if you read this blog, it's because you're interested in this evaluative process, to a greater or lesser degree. You can now have yourself certified [insert joke here] as Possessor Of Beer Knowledge by The Beer Academy, who are running a series of "How To Be A Beer Judge" courses all over our beer-soaked isle. You can have a look at the schedule here. I'm particularly pleased to see that the Leeds course appears to be nearly full, which means that by the time the European Beer Bloggers Conference hits town in May there will be a sector of the local populace, distinguished no doubt by gowns and mortarboards, who are able to talk about why a beer is either awesome or bogus with reference to appropriate evaluative language. You never know, it might bring you a step closer to that hallowed gig of paid writer.
Posted by Zak Avery at 06:59 10 comments

I don't think there's any doubt that Open It! Live in Leeds was a great success, thanks in the main to the Rick Furzer for organising it, but also to all of the attendees who brought along a mind-boggling assortment of rare beers (and a 75cl of Leffe Brune) to share.

I was going to give a write-up of everything that I ate and drank, but that has proved too Herculean a task even for me. Instead, some things that made me think the most on the night, in chronological order.

Up until last Saturday, I held a certain belief that some beers just don't go with food. Orval is one - it's a great beer, but it's simply too dry to go with anything in a symbiotic way. It's a perfect aperitif, and hell even a great beer for just drinming (imagine that!), but it's not a "food beer". Lambics too sort of rested on that list, although now I realise that what I really think is that Cantillon beers aren't food beers. Indeed, the glass of St Lamvinus (thanks Gav) that I tried merely served to reinforce my opinion that I just don't anything that Cantillon make. It's all too wild, too stinky, and just plain wrong. What threw this into sharp relief was the appearance of a couple of American "wild" ales (although termed wild, they aren't spontaneously fermented, but rather innocculated with certains strains of yeast and bacteria).

Upright Brewing Sole Composition #7 (disclosure: I brought this beer along, and it was sent to me by Jeff Alworth of Beervana), and some post-prandial bottles of various Russian River wild ales clarified this belief. These had all the tartness and complexity that I enjoy in a lambic beer, but without the sensation that they'd been strained through a farm-hand's underpants before being bottled. I thought the same of the aged bottle of Fraoch 20 (mine again) - it was tart and funky, but didn't smell of pigshit and compost.

Food match of the night for me was the crispy belly pork, black pudding, celeriac and mustard salad with Mikkeller Stella 1 porter (thanks again, Gav). The sweetness of the pork and the savouriness of the black pudding played off against a similar set of sensations in the beer, making a match that was truly greater than the sum of its parts. Somehow these combined to take what on paper (or screen) sounds like hard work, and turned them into something that could quite happily have eaten all night in place of the rest of the meal. And the magnum of Stella 1 would have been a worthy accompaniment.

Another highlight was, or course, the generosity of everyone. I was particularly touched by Tyler showing up with a bottle of Pretty Things Jack d'Or, grinning as he handed it to me, knowing that it was one of my favourite beers of last year. Andy and his better half for bringing along a box full of Russian River beers. Another Andy for the brilliant and scurrillous industry gossip. And everyone else who came and shared beer, ate great food and made a fun evening happen.

The fun carried on into the night, rolling on to Mr Foleys and North Bar. I bowed out at about midnight, after (and I don't like this phrase, but there's no other way of putting it) smashing down a couple of devastatingly fresh pints of Ska Brewing Modus Hoperandi and demonstrating why I'm one of the UK's foremost beer communicators.

The food at Create was excellent, and the staff are great too. I'd recommend it without a second thought

I also did a tumblr blog for the evening - if I could figure out how to reverse the order of the photos and edit the title, it might add a bit more to it, but I appear to be showing my age with regards technology these days.
Posted by Zak Avery at 09:26 1 comments