I know that this blog has hit the doldrums of late, and I've only been moved to post in order to put the boot into things, but let's be positive about something for a moment.

Although I only managed to get to IndyMan for a scant few hours early on Friday, it confirmed my suspicion that it really is a must-do event on the beer calendar. The addition of Camden Brewery this year means that there really is something for everyone, from the casual drinker to the hardened geek. Only a controversy-baiting sourpuss would say otherwise. Sure, you won't be paying pub prices, but it's a temporary event in an amazing venue, and while some might say the beer was expensive, I'd point to the difference between price and value. It's a fantastic celebration of beer culture away from the mainstream.

I didn't get to try a huge variety of beer, but what I did try (Quantum Pale Ale, Wild Beer Co The Blend, Wiper & True Milk Shake, Cloudwater Motueka Lager and their IPA, Magic Rock High Wire) was all superb. A few tasters from other peoples' glasses of what might broadly be termed Weird Shit confirmed my suspicion that there are a lot of beers being brewed for the benefit of brewers rather than drinkers. Or rather, there is a continued obsession with novelty - what's new, rather than what's good. This, coupled with piss-poor quality control*, are the twin challenges that smaller independent brewers face.

But let's not dwell on the negative. Everything I saw at IndyMan this year was joyous. Happy people, great beer, amazing venue, and even the music wasn't too intrusive. The addition of a take-home canning service offered by We Can was a masterstroke - the next evening, I was drinking my take-outs at home, and my feelings were summed up by this response to my tweet: 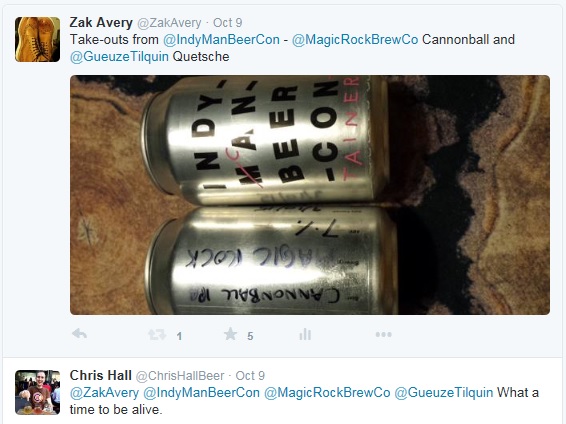 IndyManBeerCon, we love you - don't change a thing.

*I was at a bar in Leeds recently, and after trying 3 indifferent local "craft" beers the wrong side of £4 a pint, I was asked what I wanted next, and my reply was "Whatever". I can't remember ever being so disinterested in a choice of beers before.
Posted by Zak Avery at 11:01 21 comments