On Thursday night, I was delighted to give a short talk to the Northern branch of the Institute of Brewing and Distilling (IBD). The topic that I'd been asked to address was the relationship between British and American craft beer cultures, which is something that I like to pretend I know a bit about. Of course, when faced with an audience of very well-respected brewers and other assorted luminaries, it's hard to remain cool, so rather than major on trifling things like facts, which are either right or wrong, I fell back on the safety net of telling a story anchored to a couple of key points.

To summarise thirty minutes of rambling into a few sentences: a lot of the early American brewers came out of the homebrew scene, and looked to Europe generally and Britain specifically for inspiration; Jack McAuliffe at New Albion was just ahead of the curve; when Ken Grossman brewed an English-style ale with local Cascade hops, he set the blueprint for the industry; for a country whose culture has dominated the world, the craft brewing scene in the US is still mostly about local beer, drunk fresh; there is an ongoing, symbiotic realtionship between American and European brewing traditions; dragging bottled beer from California to Europe is, if you stop and look at it, a really stupid idea.

Let's expand on some of those, shall we?

When Ken Grossman brewed an English-style ale with local Cascade hops, he set the blueprint for the industry.

The beer that became Sierra Nevada Pale Ale was a local interpretation of what brewers in Britain were doing at the time. It was born out of expediency, using local ingredients feremented in converted dairy tanks, a tried-and-trusted route into the game. The key point here is that the beer is about what is available, a bottom-up approach to craft foodstuff production. That Sierra Nevada have become the worlds largest consumer of whole-cone hops is born out of that mindset of wanting to do something in a traditional way, but just do it on a scale that boggles the mind.

For a country whose culture has dominated the world, the craft brewing scene in the US is still mostly about local beer, drunk fresh.

Americans don't mess about. They take everything very seriously, even fun, perhaps down to the fact that they have so little paid holiday that when they are on their own time, they want to have fun RIGHT NOW. Craft beer is an expression of that. But despite the fact that Sam Adams Boston Lager, Sierra Nevada Pale Ale and Brooklyn Lager (or at the very least, one of those three) are available in most UK supermarkets, American beer is still about local production and consumption. For example, Odell Brewing have a wider presence in the UK than they do in the US, but they only export a half of one percent of their output to the UK.

There is an ongoing, symbiotic relationship between American and European brewing traditions.

This just can't ignored. Sierra Nevada Pale Ale is Fullers ESB brewed with local ingredients. Access to cheaper air travel in the 1980s meant that people and brewers (actually, brewers are people too, aren't they?) were able to travel to the USA and discover these new-fangled beers. You can't brew American beer without American hops, and so back over the pond they came, vac-packed and ready for action. British drinkers turn their back on traditional British ales, and the UK hop industry starts to founder. With wonderful symmetry, American craft brewers become interested in traditional British (actually, damn it, they're English, aren't they?) hop varieties, and the UK hop industry is saved via export to the US (This was put forward by Venkatesh Iyer, head brewer of Leeds Brewery - I think it's such a wonderful idea that I'm going to start passing it off as my own).

Dragging bottled beer from California to Europe is, if you stop and look at it, a really stupid idea.
Most beer is around ninety five percent water, and comes in a heavy glass bottle. Why wouldn't you move the key raw ingredients nearer the point of consumption and make the beer there? It will be fresher, tastier, and cheaper in the long run. So while Sierra Nevada are approaching carbon-neutral status by virtue of solar power, CO2 capture and anaerobic digesters, they they squander all that by insisting on refrigerated transport for their beers. You can look it it the other way too - they've earned the right to use refrigerated containers by virtue of being so eco-friendly at the point of production. Of course, this raises the issue of whether a beer brewed under licence is the same beer. Sam Adams Boston Lager for draught dispense is now being brewed at Shepherd Neame. Some moan about this, I'm on the fence about it. Would we feel happier if Sam Adams built a European brewery? What about a generic European American Craft Beer Facility that contract brewed for, say, Sierra Nevada, Brooklyn, Sam Adams and Stone? Or do we need the brewery's badge on the door to make us happy?

A couple more further thoughts. I was asked what I thought future trends would be. I think freshness is going to be a real driver of growth over the next 10 years, and allied to that, I also think that gap between the producer and the consumer will become smaller, and maybe the brewpub will make a return. But simply put, nothing tastes better than fresh beer.

The second point comes out of this. As British consumers come to realise that freshness is important, so understanding will grow about the ingredients in beer, and how those ingredients are key to enjoyment. I've said it before, but what American craft beer is doing to the beer industry in the UK is similar to what happened in the late 80s with Australian wine - it demystified the subject and made it easier to understand. Citra is basically Aussie Chardonnay in hop form, and that's actually good thing. But a lot of the key American hops - Citra, Amarillo, Simcoe, Ahtanum - are owned by individuals and grown under licence as registered brands. The question was asked of me; what to do when the year's crop runs out. My answer is to stop production of that beer, and explain to the drinker why. This was, you reinforce the idea that beer is a natural, agricultural and, to a certain extent, seasonal product, and imbue with all those qualities beloved of foodies the world over. Maybe the reason that BrewDog stopped making Chaos Theory is that it rested solely on a particularly sensational crop of Nelson Sauvin one year? (Thanks to Stuart Ross of Magic Rock for suggesting this to me). If that's the case, why not make a virtue of it?

These aren't finished ideas, or even close to being fully-formed, but I'd still love to hear about it if you agree or disagree with any of them.
Posted by Zak Avery at 08:29 32 comments 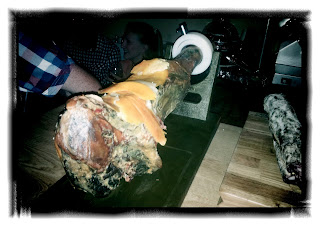 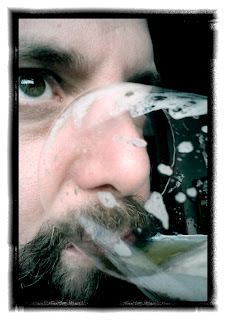 There are lots of reasons for going to the pub. One of my favourites is cask ale - it's just a bugger to have 72 pints of ale sloshing around at home, and the pub usually does it so much better than I could. I like the sociable aspect of sitting around with friends, drinking beer, inhibitions slowly being worn away, defences slowly lowering. By the end of it, much to my surprise given my misanthropic streak, I feel slightly more human for having spent time with people.

But equally, I love the solitary pint or two. For me, the pub is the third place, between work and home, a public house where I can be at home. But I don't think I've ever gone to the pub just to drink. More often it's to make phone calls, to look for inspiration to write, to actually sit there with a netbook, pecking away at the keys, trying to hit a deadline, or trying to turn number crunching into something slightly less dreary.

Sometimes I like to get really comfortable and take my shoes off. I'd never dream of going to the bar without shoes, but there's something incredibly relaxing about slipping off your shoes while you work, Tweet, or just make plans on the phone. It's not something I'd do in company - that would just be weird - but on your own in a pub, with a pint, shoes off, brain zinging away on a project - that's something else.
Posted by Zak Avery at 19:53 8 comments