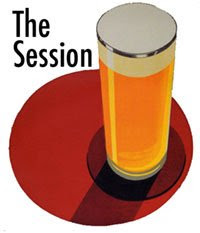 One of the things that I love about the Great British Beer Festival (GBBF) is the stunning array of foreign beers on offer there, on the Bieres Sans Frontieres bar. I know it sounds wilfully perverse to go to the biggest cask ale festival in the world in order to drink foreign beer, but I do.

One the things that makes this bar a highlight is that they usually have a huge array of American IPAs (and all the style variants thereof). But this being a CAMRA festival, they ask for these beers to be cask-conditioned specially for the festival. I think it's safe to say that the majority of American IPAs (and American beer in general) is not often dispensed in this format.

So, it's the best cask ale festival in the world, and it's great that these beers are on offer. I'm even a fan of serving cask ale by gravity, straight from the cask tap into a glass. But still, it feels like there's a little something missing. That something is the tart prickle of CO2.

I think that the majority of American IPAs are better drunk as they were intended to be served - with a little zizz of CO2, and on the cold side of cool. This isn't a moan about quality of cellarmanship at the GBBF (or anywhere else), or a moan about CAMRA's insistence that beers shouldn't be served under CO2 pressure. Those are different arguments, and ones that I have a lot of respect for. But what I am saying is that all too often, the big malty backbones and showy hop characters of these beers are lost through lack of carbonation. There is just too much flavour in them to be showcased with the sort of gentle carbonation that cask conditioning gives. It needs the slightly coarser aeration of forced CO2.

So to be clear: CAMRA run the best cask ale festival in the world, and I'm grateful to go there and drink the beers on offer, cask-conditioned or bottled. But these big beers need a little spritz to lift them, and I'm not talking about a sparkler. Now that really IS a different argument.

POSTSCRIPT: yes, I know The Session is a Friday thing, but as you can see, I was drinking beer and making enchiladas