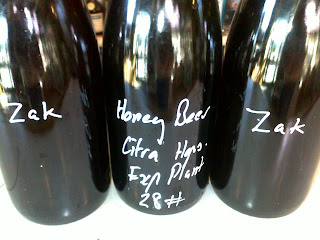 God bless Roosters. They are such an iconic English brewery, and yet it sometimes seems to me that they are only known to relatively small section of the beer-drinking public. They have forever ploughed a lonely furrow through a field full of pale malt and new world hops. And when I say forever, I obviously don't mean forever, what I mean is a long time for a brewery that make such a singular style of beer - soft, pale and golden, with a pronounced hop character. They even make a brief appearance in Michael Jackson's Pocket Beer Book, 1997: "In Harrogate, the Rooster micro is noted for hoppy ales, sometimes varietal".

Roosters don't really bottle a lot of beer, so being a person who doesn't get to the pub as often as he'd like, I don't drink as much of their beer as I'd like to. Conversely, my pub drinking is disproportionately swayed in favour of Roosters. A quick pint in Leeds' Mr. Foleys the other night had to be Roosters. In fact, now I think of it, almost every trip to the pub that I've had this year has featured Roosters. There aren't many, but at least I'm consistent.

Happily, Roosters bottle a few bits and pieces - mostly experimental and private-brew beers. The latest beers to fall into my lap are this honey and Citra hop beer. Predictably pale and golden, the honey makes it's phenolic, softly floral presence known on the nose immediately. The hops are there, but they battle for space a bit with the honey. The honey and hop play a weird trick, in that they seem to push a lot of pale malt character into the aroma. It takes a while for the palate to calibrate to what is going on, but when it does, the characteristic slightly savoury (green-pepper?) and citrus note of Citra is there, sitting in with the dry, phenolic snap of fully-fermented honey. That faintly savoury character carries into the finish too.

Roosters are incapable of making bad beer, and I love the creative spirit that they've been showing lately. Their trademark style is all about the hop, and Citra is the hop of the moment. I just can't help but wonder what this beer would be like without the honey.
Posted by ZakAvery at 19:54