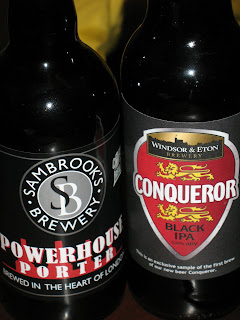 You might have noticed a certain chill in the air of late - -11°C has been my personal record. This unusual meteorological phenomenon is technically called "winter", and it has to be said, it has been kicking arse and taking names this year.

I have to admit to having sneaked the odd IPA of late, but I do succumb to the cliché of drinking darker beers in colder weather. It just seems to make sense. This pair of lovelies have been sent to me by their respective breweries. When better than the longest night of the year to tuck into some dark beers?

The Sambrook's Powerhouse Porter (5%abv) is described on the label as being "our modern take on this great London beer style". If by "modern" they mean "not left to go stale in a wooden vat for 18 months", then it's a great success - Powerhouse Porter is free from any trace of staleness and 'characterful' infection. I guess it's also modern in the sense that the hop character is pushed a little more to the fore than one might expect, but the dark malt lends plenty of backbone around which to build the gently leafy hops. It's nice, very drinkable, and if I had another bottle, I'd drink that too.

Sadly, it's a night of singletons, so onwards to the Windsor & Eton Conqueror (5%abv), a beer in that none-more-hip style of black IPA. Whatever you think of the oxymoronic name - black India pale ale? - it's a fun style of beer. The style seems to rest on the use of carafa malt, giving a dark malt flavour without roasted bitterness, and prodigious late-hopping with American C-hop varieties. Call it what you will - black IPA, India black ale, Cascadian dark ale - I like it, and I like this example too. It's medium-bodied, with the soft malty sweetness flick-flacking into heady hops on the palate, finishing with a hint of chicory coffee and IPA hop dazzle. Lovely.
Posted by ZakAvery at 21:36