Dear Diary, what a couple of weeks it's been.

Karen (my business partner) has been away on holiday for the last two weeks, and the experience of piloting the business on my own has been both exhilarating and exhausting in equal measures. Add to this a lot of top-secret behind-the-scenes stuff, some of which will in all probability never be public knowledge, and it's been quite a trip. A lot of the secret stuff has been keeping me awake at night, and has involved a fair amount of tossing and a little turning, but it's all good, believe me.

As if I didn't have enough on my plate, I've also started another blog. Leeds Homebrew is an attempt to get the homebrewers in and around my fair city to share recipes, meet up once a quarter, and give honest and supportive evaluation of each other's efforts. I have to admit to being a little disappointed about the initial take up in contributions or feedback, but I guess we'll set up the first two meets and see what happens.

Looking forward, I can see that I have a busy few weeks ahead of me. It seems that I'm scheduled to hold a tasting event at the music venue The Deaf Institute in Manchester this Tuesday. I think it's a combined public-staff session, but I'm sure if people want more information, they can contact the venue directly.

I also need to find time this week to get my entry together for the annual British Guild of Beer Writers awards dinner. I've had a pretty good year, despite being worked to the bone for the last 6 months, and I do hope I get recognised for both my exceptional talent and understated modesty.

The 15th will see me at North Bar in Leeds, drinking the beer that I brewed with Denzil from Great Heck Brewery, Heckstra-Ordinary Best Bitter. I may even say a few words about it, and about how it's an attempt to make an ordinary brown bitter for the 21st century. I haven't tried it myself, and so I may be setting myself up for a fall, but hey, that's the nature of being a wide-eyed loner at the frontiers of craft beer (whatever that may eventually turn out to mean). 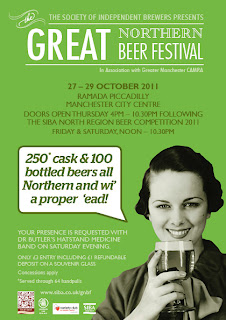 Later in the month, I'm heading to London for a day to judge the Sainsbury's beer competition, and hopefully meet wine bloke Olly Smith. Olly won a competiton a few years ago organised by Hardy's called "Wine Idol". I was going to enter it myself, but sadly never got it together - how different my life may be today if I had! But Olly seems like a good chap, and I look forward to meeting in him in all his bequiffed and ruddy-cheeked glory.

I've also just received a cheeky email from the folk who are doing the PR for SIBA, asking me to plug their Great Northern Beer Festival on my blog. They're clearly a bit new at this, as it's customary to offer something in return for a favour - usually a couple of tickets, or something - but I'm sure that they'll get the idea eventually.