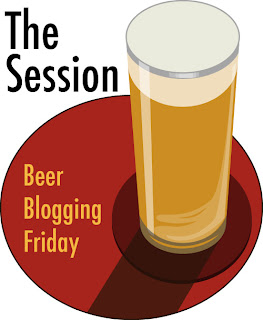 I've no idea what drives other beer bloggers, but what drives me is the desire to communicate, to give a damn, to enthuse and inspire. I'm happy if I can string enough words together to make sense, and convey something about what I think, and why I think it.

What I also think is that it's easy to preach to the converted, easy to look at your Wikio ranking or your number of Twitter followers, and assume that you're fighting the good fight as these numbers decrease or increase respectively. But as Chris points out on his blog: "niche beers are still just that, niche. Such a tiny percentage of the market. Those people live in their craft world (I'm one of them) saturated by all our amazing beer chat that we believe that it is actually far bigger than it is".

I moved from running a website to a writing blog a few years ago. I did that to be part of the wider conversation about beer. Ironically, I think that the conversation has become more narrow. Below is a private message exchange from mid-2008, when I was doing a lot of video blogging on YouTube, using an oversized wine glass to drink beer from (which coincidentally, I dropped and broke this evening). I think the challenges presented to me in this exchange, and my responses to them, helped me focus on what the point of blogging was. For me, I enjoy a bit of cut-and-thrust, a bit of challenge and debate. I'm worried that while the community has grown larger in numbers, there has been less growth in content, style and delivery.

Anyway, over to Kevin. And despite the inauspicious start to our relationship, we are still in touch....

I find it rather pretentious to pour beers into a wine glass, unless you don't have a glass to serve a Belgian in. Beer is a rather simple beverage, you're attempting to make it not so simple. To answer your question about "the correct way to taste and talk about beer", I conclude that I see no need to talk about beer. There are some spectacular ones, some middle of the road ones, and some absolute shit ones. You CAMRA individuals (I'm assuming you're a CAMRA member) take great pride informing the general public on what they should drink. What is your ambition in making videos on beer? Does this medium stroke your ego, and make you feel like you're the grand wizard of all that is beer? I'm really trying to understand beer videos, beer blogs, and everything in between. They're boring, pretentious, and usually make the person responsible for making them look like a televangelist.

Also, I find a good, old fashioned, English pint glass works as well as anything, including a wine glass!

I know that you are a beer fan and a keen homebrewer - I used to look in on your blog every now and then. I also think that you've already made up your mind about beer blogs, beer bloggers, CAMRA - you think that we should shut the hell up, and just drink the damn stuff. I don't agree with that, and that pisses you off. It's a difficult starting point for a discussion, but here goes:

I don't agree that beer is a simple beverage - there is as much variety and complexity in it as there is in wine or whisk(e)y. I find that variety interesting, and I like to talk about things I find interesting.

The one thing that I absolutely don't do is tell anyone what they should be drinking. I'm talking about what I like to drink, and why I like it. I absolutely don't subscribe to the CAMRA dogma, I'm not a real ale twat (I'm sure you disagree), and I think that everyone should drink what they enjoy. You can call me boring, pretentious, irritating, whatever - just don't assume that I'm one of those CAMRA zealots!

I've no idea what my ambitions are with the videos. At a basic level, I wanted to become proficient in front of a camera, because as a specialist beer retailer, tasting event coordinator and freelance journalist, I'm eventually going to have speak about beer on radio and TV. I want to make a good job of it when I do, and so I guess this is self-training. On another level, I thought I'd throw it out there and see who liked or disliked it, and why.

Does it stroke my ego? Well, I'm happy if I can string enough words together to make sense, and convey something about what I think, and why I think it. Does it make me feel like the grand wizard of all that is beer? No, it doesn't, but I like making a living out of beer, and I like to do different things, and knowing my stuff is all part of that.

You're right, the English pint glass is a great thing (satisfyingly bigger than your teensy American pint too), and believe it or not, when I go to a pub, I don't have a coterie of velvet-suit-wearing assistants carrying my wine glasses on a tray. But as I say, I find the shape of a wine glass better at trapping aroma. It does actually make a difference - have you ever done a side-by-side test? Or does the thought of drinking beer from a wine glass cause you too much discomfort? Maybe I should switch to a Duvel glass - the best of both worlds?

A lot of the stuff I mention is done tongue and cheek. I am not a hateful or wicked person. It would appear through our communication that you're alright. My beef is with certain bloggers.

About myself: I been to England about 18 times. I lived in Chiswick for 2 years from 1996-1998. I've been to roughly 30 English breweries and worked for Young's when they were in Wandsworth. I've had many favorite English beers over the years, and now I'd say the Dark Star Hophead is right up there with all of 'em. The hopping is very West Coast.

That's basically it. You seem to be able to stand up for yourself very well. I wish you well, and don't take anything I say too seriously.

No problem - I think a little gentle "sledging" (to use a cricket term) is healthy, and you're certainly not the first or last person to pull me up on being a beer twat. Check out the second & third comments on this guys blog.

I write a column in a UK drinks trade newspaper that gets love letters and hate mail in roughly equal proportions. That's just what happens if you draw attention to yourself, I guess. I know it's a very traditional English way to look at things, but I try to listen to praise and criticism in the same way - if you take them both with a pinch of salt, then the criticism doesn't sting so much, and the praise doesn't puff your ego unbearably - it stops you falling in love with yourself too much.

The problem really is that on the internet, because it's a written medium, it's hard to be humourous without writing "I am trying to be humourous", which sort of takes the fun out of it. I guess that's also why I went for video as a medium - it's just a bit more communicative than the written word. Although it can communicate irritation as well as passion, I guess.

I've been to the US about a dozen times - mostly New York (lived there in 1991 for 6 months - loved it, but was also glad to leave), but I also have friends who farm soy and corn in the mid-West - real people, who also mostly think that I'm a beer twat, but are happy to watch me getting all excited about beer while they drink Keystone Light (or whatever it is out there). I tried some, and fuck, it's terrible beer, but I didn't think any less of them for drinking it. Well, a bit less, but not too much.

Anyway, keep watching (if you can bear it), and do fling the occasional bit of shit if you feel like it

Keystone Light is shit, like most American lagers. Let me know if you ever come to the West Coast. There are many breweries here. I live about 45 minutes from San Diego. http://www.sandiegobrewersguild.org/brewery.php

What would be best, is to do San Diego, then fly to San Francisco and do The Toronado, Magnolia's, and The Pig & Whistle. There are many others, but all three are within walking distance. Then, if you really wanted to go crazy, fly to Portland. Bridgeport is a must do when there.

Take it easy. I'll subscribe to your youtube channel. I'll keep in touch.
Posted by ZakAvery at 22:29

Email ThisBlogThis!Share to TwitterShare to FacebookShare to Pinterest
Labels: blogging, the session