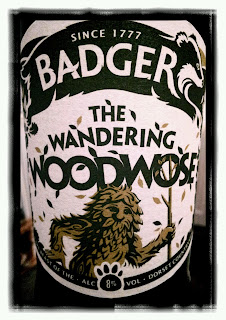 As I sit here sipping my way through a bottle of Badger The Wandering Woodwose (8%abv), I'm immediately struck by two things. The first is what a lightweight I've become of late, and how I can feel the effects of the alcohol after barely a few sips. The second is that even though this is a substantial departure for Badger - 8%abv, bottle-conditioned - it's immediately identifiable as a Badger beer, mainly down to the house yeast character. There's something classically British (or is it English?) about the soft, fruity, ripe-melon sweetness in this beer that isn't down to the malt, hops, flavour additions (a favourite of Badger's) or anything notable about the water profile. It's the yeast, stupid.

Yeast is so much the underplayed ingredient in beer that one rarely hears it talked about, even in the uber-geek recesses of the beer blogosphere, and yet ask any brewer if they would switch yeast strains, and you'll receive the sort of "you don't get it, do you?" look and shake of the head usually reserved for the feeble-minded.

The reason for this is that no matter how badly behaved a particular strain of yeast is - and let's for the moment just restrict ourselves to the seemingly endless variations of s. cerevisiae - it is absolutely fundamental to the character of a beer. I know of a brewer at a particularly successful brewery who feels that if he leaves the building for longer than a weekend, the yeast can sense that it's their chance to misbehave, and things go awry. But rather than ditch and switch, they soldier on because nothing else tastes quite the same as their own house strain.

And it works the other way too - I've done guest brews at a brewery where when I asked what their house strain was (or what it started as - yeasts will subtly mutate over time), I was told that the brewer didn't know. And another brewery who need to let the yeast run away with itself and ferment warmer than might be conventionally expected, otherwise the beers don't have the particular character that they are famed for. Or the brewery that uses the waste yeast slurry from another brewery. And for the avoidance of doubt, all the above examples are top-tier UK breweries, not madmen making ropey beer in unsanitary conditions.

A few years ago, I stayed in post-festival Cannes for a couple of days. As someone who is interested in art, I remember thinking that all the tales about the intensity of the sunlight there turned out to be true. The light there gave your vision a peculiarly heightened quality that was hard to define, and yet also unmistakable in whole swathe of 20th century art. Just as the quality of light and how it affects what you perceive is important to an artist (go and have a look at Monet's Haystacks for an example of this), so the way a yeast behaves is key to how a brewer makes a beer, and how that beer is perceived by the drinker.

As I say, I've become a bit of a lightweight lately.

*with apologies to Gabriel Garcia Marquez
Posted by Zak Avery at 21:36