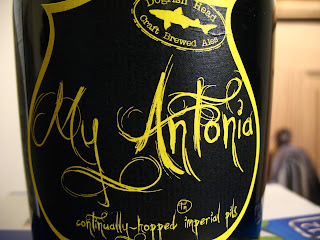 I remember the first time I heard the phrase "imperial pilsner". It was at 2008's Beer Exposed, an event that was such a success that it hasn't been held since. That's a shame actually, because I know that the organisers lost money on the trial run, but hoped to make it back on future events. I must call Des or Matt and ask about what is going on with it. But, as usual, I digress.

The first time I heard the phrase "imperial pilsner" was at Beer Exposed. I was organising my "extreme beer" walk, and was talking to Phil Lowry of beermerchants.com. He had a great selection of beers, including Mikkeler Black, a 17.5% imperial stout, which we both agreed would be a good beer to end on. He also said "if you want something unusual, I've got an imperial pilsner from ..." (I forget the brewery). As he said the words "imperial pilsner", I made a pained face, as though I'd just seen him sharpen a frozen dog turd and stab himself in the eye with it. "What makes it imperial?" I asked, wearily. "Shitloads of malt" was the enthusiastic response. I declined the offer.

A few months after Beer Exposed's simultaneous debut and wake, Sam Calagione visited Leonardo di Vincenzo at his Birra del Borgo brewery, and they brewed the first batch of My Antonia (7.5%abv), a "continually-hopped™ imperial pils". I still feel slightly uneasy about the need for "imperial pils", but on the basis of this beer, I'm cutting off my nose to spite my face. Rather than being, as I initially feared, some sort of bastard hybrid of a helles bock and an American IPA, it is instead the delightful fusion of a helles bock and an American IPA.

Lustrous burnished gold in colour, and slightly hazy (I emptied every last drop into the glass), it has a big floral aroma, slightly perfumey, almost honeyed. In the mouth, the initial sweetness carries an almost savoury character (a character that the redoubtable Jeff Pickthall has described to me as 'celery salt' - you'll certainly find that in Pilsner Urquell now I've mentioned it). On the swallow, the sweet, honeyed malt character hangs there for a moment, and then slowly transmutes into a big, slightly herbal bitterness. If I'd been served this blind, I might have taken it for a good quality tripel from one of the new wave of modern Belgian breweries. Of course, the irony is that all the new wave Belgian breweries are making American-style imperial IPAs and barrel-aged imperial stouts. What is this, a beery remake of "The Empire Strikes Back"?

I'm not sure if this beer is a regular brew, or a seasonal special, but it's really very good indeed. Vertical Drinks (UK importers of Sierra Nevada) are also bringing in beers from Birra del Borgo and Baladin as an ongoing project. Both are very good, although with different aesthetics. If you like modern-styled beers with a hop-forward character, then it's Birra del Borgo for you - I've not tried a bad one yet. And I certainly didn't think that an "imperial pilsner" would get me so fired up - but I guess times change.
Posted by ZakAvery at 20:41