Blood, Sweat and Beers: 36 Hours with the Dandy BrewPunks of Fraserburgh 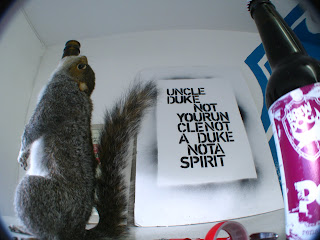 As I struggled to pick up a knife and fork the next morning, I realised that I'd had quite an action packed 36 hours in BrewDog's company. The final straw was attempting to dig out 1400kg of wet grain from the mash tun. Well, it was 1400kg dry, who knows what it was after a mash and sparge - a couple of tonnes? No wonder spearing a button mushroom with a fork was suddenly such an ordeal.

I was in town with Pete Brown and Mark Dredge to brew a beer and host a sell-out beer dinner at Musa, BrewDog's restaurant in Aberdeen. You can have a look at the menu here. I won't wax lyrical about what a great job we did of the beer and food matching (we did), but what I will say is that the cooking there was of an exceptionally high calibre - great quality, expertly executed, with not a foot wrong the whole night. The chef there, Dave More, is a serious talent. We ate and drank into the small hours, and drank some more at BrewDog Aberdeen for good measure. 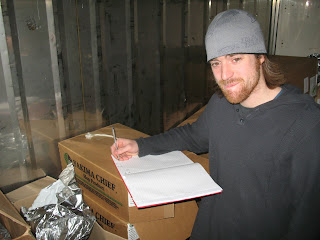 All of which would explain why team Avery Brown Dredge (as the beer will be called) was such a shambles the following morning. As we babbled our way to the brewery, it quickly became apparent that rather than arrive with a recipe and a plan, we'd arrived with a concept - a noble-hopped strong lager. It turns out that concepts are all very well, but they don't get beers brewed. Sensing that what we needed was a bit of mild bullying, Martin took us out to the hop store and with a cruel-to-be-kind mantra of 'Do what you want, it's your beer', frightened us into formulating a recipe.

1330kg of lager malt. 70kg of malted wheat. 50kg of Saaz hops. 5000 litres of water. Mashing in via an auger with a hopper on the floor, heaving sacks of malt into it, the previous night's cobwebs start to lift. Standing over the mash tun making sure the mash is smooth by pummelling it with a shovel blows away a few more. Head brewer Stewart Bowman supervising our efforts to a soundtrack of obscure German punk ensures that everything goes smoothly. A lunch of fried fish, cooked in a wok of boiling oil heated on their new nanobrew plant, and then we retire to the office for the really hard work - writing the label text. 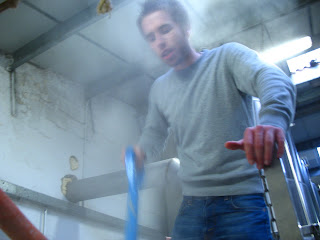 If ever you want a demonstration of the acute short-term effects of alcoholic overindulgence, put three hungover award-winning beer writers in a room and ask them for 120 word of text to go on the back label of a beer. There must have been a point where, witnessing the dazzling creative power of (and I quote) "the very finest beer writers this side of the Atlantic and rockstars of the craft brewing movement" stumbling over words - no, not even being able to start putting words together - James and Martin must have been considering throwing the lever on the mash tun, throwing us out, and pretending the whole thing had never happened. I nearly fainted digging out the mash tun, but that was easier than coaxing words out of Brown and Dredge.

Of course, the beer isn't even half made yet. After the fermentation, there's a month of lagering and dry hopping to come. We're hoping it's going to be a special beer. It's a homage to beers that we like, brewers that have made a difference to our lives and to our writing, and traditions that need to be worshipped and then smashed to pieces.

BrewDog have come a very long way in a very short time. They've made a lot of friends, and rubbed plenty of people up the wrong way. But the great thing about spending a day in the chaos of their stuffed-to-overflowing brewery that you get a feel for their passion and their playfulness, and also the way that James and Martin can inspire those things in others. The great beer is a fantastic bonus.
Posted by ZakAvery at 13:15