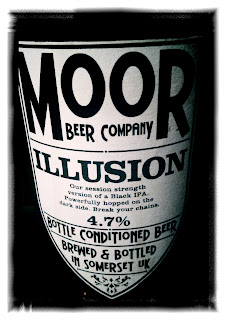 Black IPA is such a nonsense. It's a style that makes no sense - a black India pale ale that rests on the beer not displaying too much of the dark malt character that gives it its name. Why bother?

Well, like all of these infernal things that are hard to do right - soufflés, sex, making a decent Cosmopolitan - when it's done right, it's exceptional. The black IPA was first brewed by Greg Noonan at the Vermont Brew Pub in the mid-1990s, and while there is some debate on Twitter as to the first British black IPA, it seems likely that Thornbridge Raven was there first. Although maybe the BrewDog/Stone collaboration Bashah (it stands for Bitter As Sin, Hoppy As Hell, apparently) might have been the first UK-based version, should you allow collabs to be included.

The thing is, although black IPA is one of the styles du jour, it's something that is rarely done right here. Archetypes of the style (Stone Sublimely Self-Righteous and Southern Tier Iniquity are cited most often) manage to combine the balance of smooth, chocolatey dark malt with a huge hop hit in a way that seems totally unforced. Many UK versions seem to go overboard on the bitter dark malt, making a beer with the dry, smoky astringent edge of a stout with a big hop load. Trying one particularly roasty example with Sean Franklin (founder of Roosters) prompted me to comment "It's a tasty beverage, but it's not a black IPA". He grinned, and concurred. Sat with Garrett Oliver in North Bar a few months ago with another local example, he took and swig and said "that's good, but it's not a black IPA". A smooth, chocolatey note is apparently how the darker malt should manifest itself.

Moor Illusion falls slightly between two stools. It is indeed a tasty beer, and having tracked it's evolution over a few batches, it's certainly becoming more hoppy and less maltily bitter, although it still has that vague "hmmm, there's quite a lot of roast flavour here" thing going on. But having a bottle of this to hand on a quiet afternoon recently, newspapers to hand, was a blissful situation. It may not be an archetypal black IPA, but it is a tasty beer.

NOTE: I buy and sell this beer through the business I own, although I don't think this has influenced my opinion of it
Posted by Zak Avery at 23:59