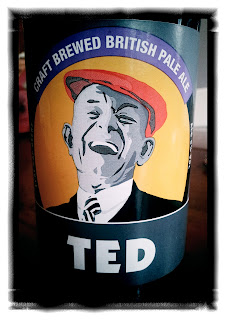 I'll jump straight to the conclusion, because I'm going to use some words and voice some opinions here that may well spark a lively debate. I really like this beer, it's a classic English pale ale, with plenty of toffee, nuttiness and spicy, pithy bitterness - so much so that it might be said to be a modern take on a traditional style. It's bitter, edgy and pushes the envelope a bit. It's rad-trad, dad, and all the better for it. I don't like the branding one bit, but maybe that's just me. What I also find slightly jarring is the stab at contemporary branding while cocking a snook at traditional imagery. Is it post-ironic? Retro-modernism? I don't know, but I'm not keen.

Let's have a look at the label, shall we? Their tagline is "Flat Cap Beers: Top Notch Craft Beer". Hmm, craft beer. Well, it's beer, and it's been crafted, I suppose. Their take on the c-word is that it means "small scale and not mass produced, independent and created with human skill and care" - Flat Capper Andy Orr explained this to me in an email. Their Twitter feed adds to the debate: "Brewed in the West Country of England & the Czech Republic". Again, hmm. Am I being taken for a ride here? Am I getting the feeling I've been cheated? The other two beers in their core range - a Czech pilsner and a Czech dark lager - are still lagering in the Czech Republic. That makes them authentic continental craft beers, right?

Make no mistake, this is all rather rum. The knee-jerk response to this is that it is All Wrong, And Must Not Be Tolerated, Because, It's, Like, Not Very Craft Really, Is It? That would be too easy though. Think a bit harder. Know any brewers who brew great beer without owning a brewery? Let's call them gypsy brewers, make it sound more romantic. And do you know any craft breweries who, when suddenly faced by a huge surge in demand for their flagship beer, decided to have it contract brewed for them? Sorry to break it to you so harshly, but that's more common than you might think, and done by the most unlikely people. Some unwillingly admit to it when directly asked, others flatly deny it, but it happens. And every now and again, when a beer moves from a small plant to a big plant, with fancy modern gizmos like flow meters and hopniks, it gets better. How craft is that?!

Craft beer, authenticity, transparency - these are Big Ideas, but now I just don't know what to think. Care to help me out?
Posted by Zak Avery at 23:31