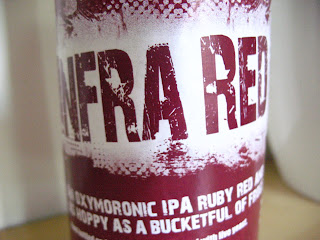 I'm not really sure how to introduce this blog. I should probably declare that Dave and I are both serving committee members for the British Guild of Beer Writers. I was chairman of the judges when Dave was runner-up in the New Media category of the Guild's 2009 awards. All this sounds like an excuse - it's not, it's just so you know how the land lies.

Infra Red (6.5%abv) is an English ale that wears it's American influence proudly on its sleeve. It's incredibly full bodied and, although I'm quite casual about it in the video, there's a bit of me that think if I was served this blind, I might mistake it for an American ale - something by Deschutes, maybe, which is no faint praise, given their tally at the World Beer Awards.

As always, the video tells half the story - you'll notice that I suddenly get sidetracked by the history of Anglo-American brewing influence. I suppose I could be a bit more professional about these videos, but I quite like the spontenaeity of pressing the shutter button and starting to talk. I honestly never quite know what's going to come out, and I quite like that. I don't think I've ever gone back and started again. But I digress.

Infra Red is a wonderfully full-bodied beer, stuffed full of pithy citrus flavours overlaying a text-book crystal malt core - think burnt sugar and toffee with a smear of grapefruit and orange marmalade, and you're getting close. It's a big beer, but very drinkable. In fact, that last time I saw Dave was at the Great British Beer Festival - it was about ten minutes after midday, and he was already getting stuck into the big, cask-conditioned American IPAs. "I've got a bit of a weakness for strong beer", he admitted. I couldn't argue - I was looking for somewhere to pour away my third of a pint of Hopshackle Hop & Spicy, a ginger beer that had ambushed me by coming from a brewery known for it's robustly hoppy English ales. Despite my tick list of new-wave British session beers (pale, hoppy - call them mid-Atlantic pale ales if you like), I was sorely tempted to join him on the American IPA bandwagon.

So, Infra Red. A great first foray into bottled beer. Full bodied, displaying a classically English approach to balance, but an American sensibility with respect to intensity. And, most wonderfully of all, when you talk to the brewer, you get the sense that they brewed a beer that they wanted to drink, rather than one that they thought would sell best.