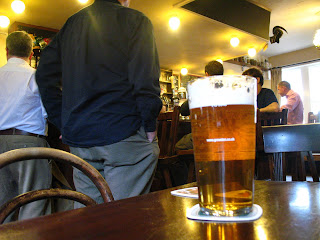 I must be bloody mad.

The M62 motorway has a certain notoriety. It is a hideously busy stretch of trans-Pennine tarmac that carries the dubious honour of being the highest motorway in the UK. It is also featured in The KLF's "It's Grim Up North" - "Morecambe, Macclesfield, Lytham St. Annes, Clitheroe, Cleethorpes, the M62 - its grim up north", a list of everything that might be thought to be soul-sucking and lifeless in the north of England, set over a pounding industrial acid techno beat.

Had I planned my visit a bit better, I would have used public transport and taken a long afternoon over this visit to The Grove Inn in Huddersfield. The pub itself is nothing short of sensational, a beer geek's dream, featuring permanent hand pumps from the cream of the new wave of British brewing - Thornbridge, Marble, BrewDog, Dark Star, - alongside a smattering of classics - Timothy Taylor, Burton Bridge, Fullers. In fact, this pub demands a long and leisurely session. Why have I spent a torturous rush-hour driving here for a single pint?

I'll tell you why. I got severely twitchy that a certain beer would run out before I got to try it - there were only 35 casks made this year, and eight of them passed through the possession of Ian, landlord of The Grove. He very generously passed five of these on to Eddie at Gadds brewery - I can only assume he hadn't tried the beer before he agreed to that. The beer is Thornbridge Larkspur (5.2%abv), a pale gold single-hop beer based around the hop variety Citra.

I use the term beer loosely. I know that this is beer, because it came out of a brewery, and is made of water, pale malt, hops and yeast. But no beer has ever tasted like this. The first sniff and mouthful, and I'm transported back to my first ever visit to Leeds, in the early 1990s, and buying fresh samosas and Rubicon mango juice drink at Maumoniat's Asian supermarket on Brudenell Grove. That first ever taste of mango juice, perfumed and almost indecently musky, was a shock to the senses, but a discovery of a pleasure that has stayed with me. In fact, for a while, I cursed the empty years that I lived without Rubicon mango juice, and devoted my life to drinking as much of it as I could.

That's the beauty of great beer - it transports you to another place, or another time, while rooting you to the spot, forcing you to pay attention to what is happening on your palate. Thornbridge Larkspur is a riot of mango juice, passion fruit, musk, a hint of vanilla custard, tangerine, peach, a nameless floral perfume, and a snap of biscuity pale malt husk in the steadily building bitterness of the finish. It's there and then it's gone, intense, but fleeting, demanding you take another sip, when the whole hokey-cokey of exotica starts over again. And again. And again, until the glass is empty.