Thornbridge: Bottle-Conditioning for the 21st Century 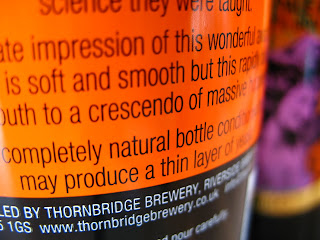 There's no question that Thornbridge are one of the most exciting breweries in the UK today. While they stop short of actually using hummingbird's tears as an ingredient, they push the envelope both with what they can get out of conventional ingredients, and what they can do with more unconventional ones. They rarely miss the mark.

Thornbridge recently moved over to putting live beer in half-litre bottles. On bottles of Jaipur, it uses the phrase "bottle-conditioned", although this has caused a bit of confusion among consumers - if it's bottle-conditioned, why isn't there any sediment? Being an inquisitive sort, I called Kelly Ryan at Thornbridge. The short answer is that there isn't any visible sediment because they don't re-prime the bottles. The long answer is a bit, well, longer.

When Thornbridge moved over to their new brewery, they had a new level of control available to them. The closed cylindro-conical fermenters meant that they could allow the beer to carbonate naturally under the pressure of its own fermentation. The same fermenters allowed them to take dead yeast out of contact with their still-fermenting beer. Centrifuges meant that they could control how much yeast was left in the finished beer, removing the need for filtration. The conclusion to the long answer is that they don't reprime their bottles because they don't need to. Not only is there enough natural carbonation in the beer, there is also enough yeast left in suspension to keep things ticking over nicely when they bottle it. The fermentation continues slowly, maintaining carbonation and scavenging oxygen.

For my part, I've often thought that bottle-fermentation can actually substantially reduce the character of a beer - it's as though that vigorous secondary fermentation actually scavenges some of the flavour compounds from the beer. Or maybe if the brewery filters the beer before repriming (a very common practice), a lot of the character of the beer is removed, and never gets put back in the second time around.

So what do we make of all this? Is this live beer? Bottle- or brewery-conditioned? Does it even matter to the ordinary drinker? My take on it is that if 21st century brewing and hygiene technology allow this to happen, and the beer tastes better for it, then great.

Either way, what I find really impressive is that Thornbridge have decided to ditch 40,000 Jaipur back labels that say "bottle-conditioned” and replace them with ones that say “May contain sediment”. Not only do they care passionately about the beer, they also care passionately about getting the right message on the label. The devil, as ever, is in the details.
Posted by ZakAvery at 13:59