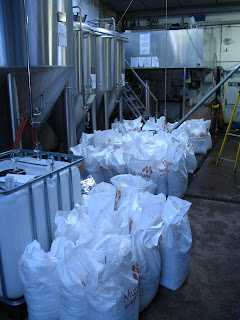 When BrewDog's James Watt asked me, Pete Brown and Mark Dredge if we'd be interested in hosting a beer dinner at Musa in Aberdeen, and then brewing a beer the next day, the answer was an easy yes. Of course, the bigger discussion was: Who gets their name first on the label?

BrewDog Avery Brown Dredge is an homage to the beers and brewing traditions that have rocked our world. Classic traditional Saaz hops married to continual hopping. The old and new brought together to try and make a statement about where beer has come from, and where it should be heading. A beer born of blood, sweat and tears. Well, that was the idea. In the end, we were so partied-out from the beer dinner the night before that no amount of lifting malt and digging out mash tuns could shift the sense that we'd had a chance for greatness, but blown it by overindulging.

But wait, what beer from yonder fridge breaks? It is the Hotpoint, and Avery Brown Dredge is the sun. The sample I have in front of me is a pre-release taster, before the dry-hopping was carried out. It's a big, malty beast of a beer, initially bready, but with a familiar slightly antiseptic snap of Saaz hops. In the mouth, the hops kick hard against the pale malt sweetness. Dry-hopping will up the aroma. What have we created? It is only a matter of time before hopfen-helles-bock becomes a globally adopted and celebrated beer style. Or is it, as the label suggests, an imperious pilsner? Come along, try some, and decide for yourself.

Kill your heroes. Make your own idols. Whatever. Just drink our beer.

7.30pm, Leeds, North Bar. Or London at The Rake and The Jolly Butchers.