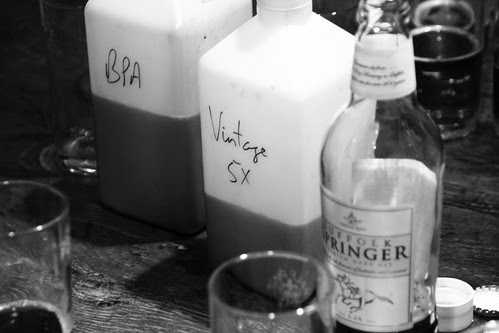 I had a great night a couple of weeks ago at The Job Bulman in Gosforth, helping to launch the JD Wetherspoon's Real Ale festival. It was a fun couple of hours of tasting through half a dozen of the festival beers with 20 or so guests, interspersed with a few bottles. So for example, alongside the Ballast Point Calico Amber, I brought some bottles of Ballast Point Big Eye IPA. And to taste after the Greene King Export IPA, I brought along a sample of Greene King Old 5X that the brewery gave me when I visited them a while ago.

Old 5X is the 12%abv beer that GK age in wooden vats, and blend with the 6%abv BPA to make Strong Suffolk Vintage Ale. Neither of these beers is released seperately, so having a bottle of something so unusual was quite a coup. This beer isn't a silky, polished wood-aged beer, but an old, oxidised, 'spoiled' beer that bears more resemblance to Belgian beers like Rodenbach than anything that we might think of being barrel-aged, which has come to imply spirit casks.

I introduced the GK Export IPA with my usual spiel about how much I love the regular GK IPA - I do, honestly - and how GK's beers are a paragon of traditional British ale brewing. I also touched on their purchase of various breweries, which also touches a nerve with people. Some people think GK are a horribly rapacious corporation who have bought and closed breweries for the sake of it. GK's take on it is that the breweries were for sale on the open market, and that they are a business, and that the brands and beers still exist, albeit produced centrally.

It's fair to say that things got a bit heated as I talked about GK. There was a shout from the other side of the room that I didn't quite catch, but it was something along the lines of 'this is like Nuremberg'. Everyone stopped short of booing me, but it was clear that I'd overstepped the mark in my praise of 'Greede King'.

I shared out the Old 5X, and it's fair to say that everyone was stunned by it. Its incredible sherry-like complexity and slightly acetic sharpness made for a reflective moment in the room. That's to be expected - Old 5X is a great beer, and the sooner GK can find a way to do a single-release of it, in nip bottles, the better. But after that, as I wandered round chatting to people, and they berated me to my face for my perceived GK propaganda, almost everyone ended their tirade with something along the lines of '...but actually, I had a really surprisingly good pint of their IPA in...'.

While it's easy to get fired up about new and exciting beers, it's not often that people get fired up defending tradition. Quite often, praise for British beer seems to get caught up in some jingoistic tirade against lager, which is perceived as a foreign invader, or American beer, which is still misconstrued to mean solely Bud, Miller and Coors. I thought it was quite refreshing to see such passion expressed about beer at what might be called the 'traditional' end of the market. What was also enjoyable was people publicly denouncing GK for their business practices, but at the same time discreetly admitting that they liked their flagship beer.
Posted by ZakAvery at 10:37