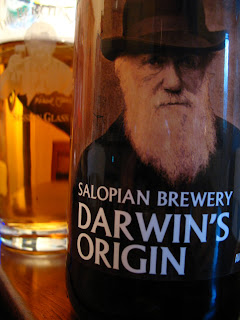 Unlike Cooking Lager, I didn't get into blogging just to get loads of free beer, although equally, I don't try to send it back when it arrives. I actually get a lot less freebies than you might imagine, and am very poor at sending feedback to breweries when they do. So I'm going to try to write up free beers as and when I drink them, which tends to be anything from a few days to a few months after I get them.

Salopian Darwin's Origin is a cracking drop of beer. It's not smothered in Nelson Sauvin or Citra, it's not brewed with a fancy yeast, it's not 'if your just having one, have THIS ONE" strong (it's 4.3%abv). But it is a classic British ale brewed with one eye looking forwards, and one eye looking back, a bit like Marty Feldman if he were a brewing historian. It's a classic pale copper colour, and the aroma is spicy and citrussy. I'll throw caution to the wind and make a stab at the hops being trad and new world - maybe a mix of EKG and Challenger. The malt bill is, I'd guess, mainly pale malt with a few percent toffeeish medium crystal, a sprinkling of biscuity amber perhaps. At least, that's the sort of formula I'd use if I were trying to make a beer like this. It's classic, yet modern, drawing on a traditional style, and yet quite contemporary in feel. Best of all, it's got Charles Darwin sporting massive white beard on the label. I'm drinking it out of my Beer Hunter Session Glass, which has a bearded, ghostly Michael Jackson printed on it.

I'm sporting a beard too, not a big, bushy one, but a neatly trimmed evil-genius style beard. But keeping it modern, I'm wearing a shirt that has a William Morris-style print on it. I'm sort of Pete Brown meets Lenin meets Mr Spock, minus the pointy ears (Spock's pointy ears, not Pete Brown's). But I digress.

It's slightly coarsely fizzy (the beer, not my beard) as it's force-carbonated and not bottle-conditioned, but you know what - just pour it a bit more carelessly and knock some of the gas out. I wouldn't go so far as to say 'hop-forward and in the modern style', but it's definitely 'classic ale with a weather eye on the trends'.


*or three, if you include mine