Beer Festivals - What Are They Actually For? 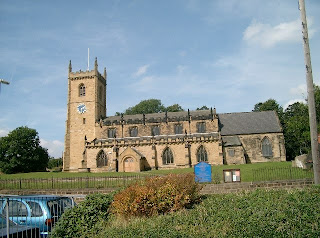 I had a cracking night out on Friday. Just 200 yards from my front door was the second Rothwell beer festival. I met up with a mate and we hit the bar, along with about 500 other people - not a bad feat for a hall with a capacity of about half that. The thing that made this festival so special was that we were allowed back out of the hall, into the churchyard in front of the church you see pictured. It was a warm evening, and the combination of great beers, an enthusiastic and genuinely mixed crowd, and a 'first day of summer' feeling made it quite an event. Indeed, so caught up in the revelry was everyone that they pretty much did for all of the beer on the first night - by the time I went back at 7pm on the second evening, there were only 5 beers left on.

I've gone on record as being a bit of a miserablist about beer festivals - they're generally not conducive to sitting around and chatting, they're usually held in slightly naff municipal settings, and they tend to live up to all the clichés about real ale that you expect to find. I won't rehash those here, but I will say that I was delighted by the really broad mix of people at the Rothwell beer fest - maybe it's because it's a more suburban effort, but it really did draw everything from hip young things to grizzled old soaks. I'd like to think of myself as somewhere between the two, but judging from the amount of 'hey beardy' stick I got, I fear I'm nearer the far end of the spectrum.

But as well as drinking some great beers (highlights included Five Towns Peculiar Blue, and Elland Eden), it got me thinking - what are beer festivals actually for? Are they just a big, hit-and-miss sort of a party, where you turn up and make your own fun? Are they a bit like a pub that you only visit once? Are they more about the beer than the festival, or is it all about "the craic"? I like to use the odd solitary session at beerfests purely to try as many different thirds as I can, as I find that gives a really clear idea of who's failing, who's hitting the mark, and who's trying too hard. Well, until about the 12th third, when it all becomes a bit academic, and I settle on a final pint of something a bit pokey that I'll come to regret on the bus journey home.

So then: Beer Festivals - How Do You Like Yours?