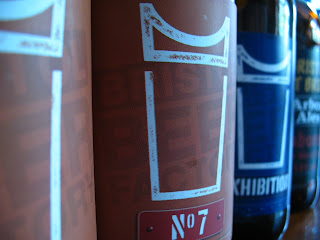 One of Stan's rules states that you need to try at least two servings of any beer before passing judgement on it. A modification of this rule is that you should try a few of any brewery's beers before you form an opinion about the brewery.

Had I tried only Bristol Beer Factory's No. 7 and Gold, I might have come away thinking that they are a brewery who have got a feel for craft beer, but haven't quite nailed it yet. Both beers are good, solid golden ales, characterised by a big hop bitterness in the finish. Tasty, but not quite hitting the bullseye on my target marked 'hop-forward and in the modern style'. Hey, not everything has to hit that target, but something about their branding and use of 'new media' made me think that they are aiming for the stars.

So thank goodness I didn't disgrace both myself and them by forming an opinion on those two beers alone. Having tried a few other beers in their range, I can now see that Gold and No. 7 are beers that sit deliberately in the 'solid & reliable' area of their output.

The other beers that I've tried from them so far - Milk Stout (deliciously bittersweet), Southville Hop (heady, hoppy, American-accented), Exhibition (big, old-fashioned, nutty) have helped flesh out that impression, and framed an opinion about them, and that opinion is highly favourable. In fact, I'd go so far as to say that one of their beers, their New World Tripel collaboration with Arbor Ales, is one of the most enjoyable British-brewed beers I've had the pleasure of drinking this year. It's a riot of peach and apricot fruitiness, finishing with some cakey spiciness (ginger, mace). Delicious, and ruinously drinkable at 6.8%abv, I'd emailed them to ask if they had any more before I'd finished the first bottle.

I know that's in direct contravention of Stan's third rule, but sometimes you just know when something is right.