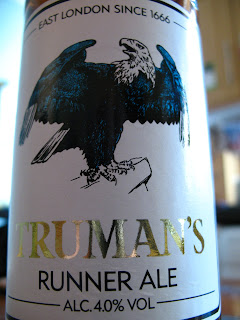 If you read this blog with anything approaching the sort of fervour that I've long hoped to inspire, it won't come as any surprise to you that I love brown beer. Ordinary brown beer. Full-on, unreconstructed brown beer. The sort of nutty, full-flavoured brown beer that inspired a generation of American brewers into making something other than wet, yellow air. Admittedly, by using the ingredients that were local to them, they failed in creating ordinary brown beer, and instead created a the sort of global lupulin arms race that finds its illogical conclusion in beer like Mikkeller's 1000 IBU - beers that so miss the point of what beer should be that it's hard to even guess where they came from.

Thankfully, Truman's Runner Ale (4%abv) is the sort of ordinary brown beer that knows where it's come from. Runner Ale is a beer that wears its colours firmly on its sleeve, and that colour is brown. But the thing is, it's easy to equate brown with boring, and Runner is anything but. It's the sort of full-bodied, bitter, nutty, dry beer that beer was built on. Not the sort of floppy-haired beer that relies on pilsner malt and precocious, evanescent new world hops with names like Ahtanum and El Dorado. No, good, solid traditional hops - Fuggles, Goldings, Styrian Goldings - and lots of chunky dark malt give Runner the sort of uncompromising taste that made British beer great.

Reading that back, that sounds like it's meant to be a ironic and take the piss out of such an unreconstructed classic style of ale, but it isn't mean to be. It's meant to evoke admiration for the unchanging nature of such a great ale. To deride this would be like deriding a sculptor for working with his hands and being covered in dust at the end of the day - sometimes you need to look beyond the facade and examine the meaning of something, rather than just judge what the appearance implies.

Truman's Runner Ale is a huge, hulking, giant of a beer, not caring for fashion or fripperies, self-assured and swaggering into the room with the sort of cocksure confidence that is born of genuinely not giving a toss about what anybody thinks, and is all the greater for it.

And the eagle on the label would make a great tattoo.