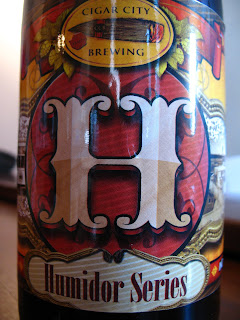 I've got an irrational hatred of wood-aged beers. Well, that's not quite true - my dislike is based on having tried dozens of wood-aged beers, and finding the majority of them to be an over-concentrated, spirit-influenced, hot, boozy mess, which I don't enjoy, so it's not entirely irrational. Let's start this post again, shall we?

It's my experience that wood-aged beers are over-influenced by the wood that they've spent time in. I like the soft, silky polish that you find in the Ola Dubh series, and of course Greene King's beers that incorporate their wood-aged Old 5X are usually a symphony of complexity. But what I really dislike is a 9% imperial stout put into a whisky cask and coming out as a 14% mix of beer and whisky. Your mileage may vary, but that's my experience and opinion.

So I'm not really sure what I was thinking when I bought this from the BrewDog shop - it's one of their guest beers, and I thought, well, why not. It has a good reputation, and sometimes you simply have to spend a bit of money and see what all the hype is about. The fact that the Cigar City Brewery's website is a touch hard to operate did nothing to inspire me, but hey, I wanted to try some new beer, and so I took the plunge.

And you know what? I'm glad I did. I can't vouch as to whether this bottle is representative of what it should be, but it's a surprisingly robust, almost English-style IPA (think Meantime IPA) crossed with a typical American IPA, and aged with cedar wood. I'd guess that it's aged over cubes or staves - it's definitely not a barrel-ageing treatment. But regardless of the technique, it's the end result that counts. Alongside the brown-sugar and marmalade aroma, and the sweetish initial attack, the spiciness of the cedar wood swooping in mid-palate adds a dimension that I'm not sure could be achieved any other way. It's a pungent, resinous spiciness that sits between the malt and hops, and adds a new dimension that throws both into relief. Crucially, by doing this, it actually makes you concentrate harder on what's happening on your palate.