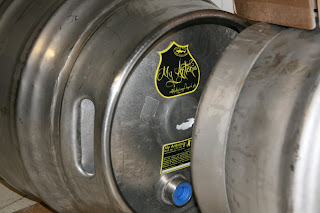 There was a pleasing symmetry to a drinking experience this week at the York beer festival. No, it wasn't the surprise appearance of Saints & Sinners / Steel City Hopsession #2 at the festival (complete with shabby chic pumpclip), but I was surprised to find a cask of Birra del Borgo / Dogfish Head My Antonia. It was exciting because this has been one of my favourite beers of the year. From sampling it in 75cl bottle format, to drinking it on draught in Rome, to finally finding it on cask in Yorkshire, I'm starting to get the sensation that this beer just can't get enough of me. I half expect to turn on the tap to make a cup of tea and find it pouring out. That would be nice.

The first picture shows a couple of casks at the brewery in Borgorose. As I was being shown around, I asked who they were for, and the reply was a bit noncomittal - it was just to go to England. I can tell now why brewer Leonardo Di Vincenzo was so economical with the truth - clearly this had been casked exclusively for my enjoyment at York beerfest, and he didn't want to spoil the surprise. How thoughtful!

Seriously though, this is something of a coup, and down to Jamie Hawksworth and his sterling work in creating a series of iconic beer business in Yorkshire (Pivo, The Sheffield Tap, plus a wide and varied importing and wholesale operation). And while we're at it, thanks to Vertical Drinks for their importing of this great beer in a rare format. But still, it's something of a credit to Jamie that he came along and judged at the festival, toting a bottle of what I think might have been a pre-release of BrewDog's AB:03, a stunning, mellow red berry ale. BrewDog James had come to see me a couple of days previously and left me with a bottle, which I selfishly didn't bring to the beer festival to share with my fellow judges. Clearly to rectify this, I will have to travel with a bottle of beer about my person at all times - Jamie's generosity proved the maxim that beer is better shared. 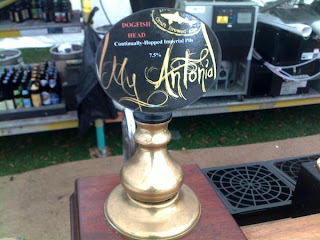 But back to the point - casked My Antonia. It was a beautifully hazy golden beer, with an aroma of peaches and apricots. The Saaz snap that made the keg version so brilliant was there, albeit subsumed into a more rounded, fruity character. It was alarming easy drinking for 7.7%abv. I had a half, and then tried to slowly wean myself onto weaker beers, via Hardknott Infra Red (oddly chewy in cask), Crown Red Barron (again, weirdly full bodied - maybe red IPA is a blind spot for me), Marble Dobber (brilliant, but surprisingly bitter) and Five Towns Niamh's Nemesis (beer of the festival, but by my reckoning, not even close to the best beer I drank that day).

So, York beer festival - delivering beyond expectations, and providing closure to my peak beer drinking experiences. And I didn't even have to leave Yorkshire.
Posted by ZakAvery at 22:14