Two From The Back Of The Shelf 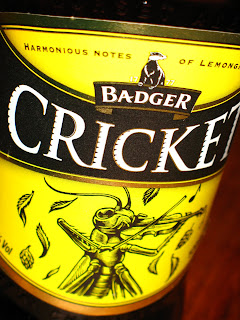 One of the nice things about having a cellar - a proper damp, cool underground room in the bottom of the house - is that it keeps beer close to serving temperature most of the time. It's like a big cool room, about 10°C, and so I can just wander down and find something ready to drink most of the time. And the nice thing about working in the trade, and being sent beer, is that there's usually quite a bit of beer down there. Inevitably, beer tends to stack up on the shelves in good times, and in lean times the shelves get emptied. So it is tonight, when having exposed the bottles at the back, I find a couple of forgotten bottles: Badger Cricket (aka Lemony Cricket, 4.4%abv) and Fallen Angel Hopped Up Cider (4.8%abv). 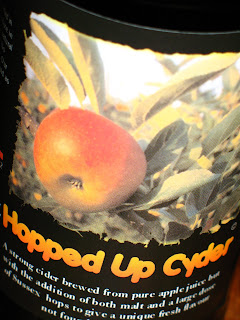 I've had Badger Cricket on cask while visiting the family down South. It's an ordinary brown beer (and I mean that in a good way) with pretensions to being a spring/summer ale by virtue of having lemongrass added to it. I have to say that on cask it suffers a bit from a surfeit of lemongrass, like the other lemongrass beer I've recently tried, Hopback Taiphoon. Happily, this beer appears to have suffered a bit in the bottling process - all of the perfumed nonsense is thankfully knocked out of the beer by rough handling on the bottling line, and what emerges from the bottle is a brown beer with a faint hint of lemon balm in the background. It's really good actually, and makes me wish I had another bottle. Sadly, my signature move of reviewing the last bottle in a free case deprives me of that option.

I have to say that I had zero hopes for Hopped Up Cyder, "A strong cider brewed from pure apple juice but with the addition of malt and a large dose of Sussex hops to give a unique fresh flavour not found anywhere else". As if that doesn't sound bad enough, the labels on their beers are the most unreconstructedly offensive crap I've seen in a long time. It really goes beyond laddish, postmodern or even post-ironic. They're just crap. Offensive crap.

So it pains me to say that Hopped Up Cyder actually isn't bad. I'd suggest attempting to create something that is halfway between a beer and a cider is doomed to failure. The tart dryness of the cider is suggestive of beer that has gone bad. The earthy bitterness in the aftertaste hints at an overly tannic finish. But neither of these dominate, and the end result is clearly a cider with a bit of of a wild yeasty bite to the finish, although the hop note in the finish does send one for something of a loop.
Posted by ZakAvery at 19:58