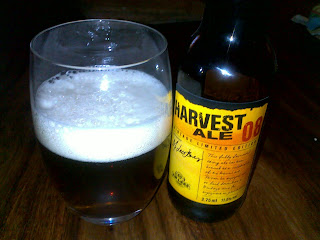 At the GBBF this year, I bumped into Dave 'Hardknott' Bailey about 20 minutes after the festival opened. I was trying to ease myself into an afternoon's drinking with a few session ales, but Dave had waded into the bigger American IPAs already. 'I've got a bit of a thing for stronger beers' he said, somewhat ruefully.

I know what he means.

Higher %abv beers pack a certain punch that weaker beers don't, and I'm not just talking about the alcohol. Whichever way they go - sweet malt sugars left unmetabolised by exhausted yeast or fully attenuated spicy dry beers - there's a depth of flavour there that a creatively mashed, well-hopped lower %abv never attains. There's a sweet spot for me around 6 or 7%abv where beers start to get really satisfying. Satisfying in the sense that they do actually feel nourishing. Maybe it's just that I'm dog-tired at the moment, and my body appreciates the extra carbohydrates of a slightly sweeter beer. Or maybe it just likes the gentle flush of alcohol.

Either way, there's no getting away from the fact that JW Lees Harvest Ale is both sweet and strong. In fact, it's such a sweet beer that it almost doubles as a dessert - figs and toffees, bananas and brandy all feature. And it's such a strong beer (11.5%abv) that it only really makes sense as a beer that closes a meal, or precedes bed.

The latter, in this case.