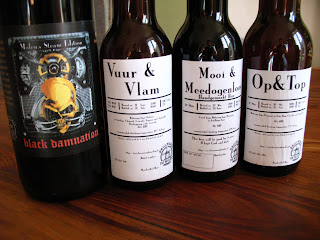 I had a very nice evening out last night. I went for a beer with Rick Kempen of Bier & Co, who was in town for the night. He very kindly brought me the bottles shown in the photo, and I paid him back with bottle of Fuller's Gale's Prize Old Ale 2007. As we swapped bottles in the pub, his colleague Gaius Voûte commented that we looked like a pair of beer geeks. We were pleased, but I don't think he meant it as a compliment.

There's something nice about making a gift of beer from home, whether that's me taking some proper Yorkshire beer down to the family in Wiltshire, or swapping beers in person with a foreign visitor. It reminds of the time in the late 80s that I used to visit friends in New York - I'd always take some English beer with me as a gift, although the 4 pint carry-out keg of Tanglefoot didn't travel too well. They let me take it on as hand luggage. No, honestly, they did - it was acceptable in the 80s.

Taking it a stage further, there's always the trading forums on Ratebeer and Beer Advocate if you really need to swap something to get something (you need to be logged in to view them). I've never done that, and would be interested to hear if anyone has any stories of success or failure either way - not for any journalistic (bloggeristic?) reason, but I'm just curious. Plus a Facebook buddy who lives near to Russian River has suggested we trade bottles (hi Will, if you're reading this). Obviously the cost of postage doesn't make financial sense, but I like the idea that beer geeks on different continents will happily send each other rarities at their own respective expense.

It could be like the Cameron-Obama beer summit, only with good beer.