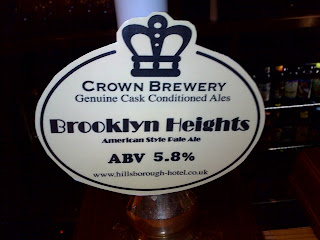 Damn. Forgot to ask them to take the sparkler off.

For me, one of the most exciting trends in British brewing in the last few years has been the resurgence of the hop, or more specifically, cask ales with big American C-hop character. I've said it before, but the transatlantic conversation between American and European brewing culture has never been more excitable or exciting. Despite not getting to the pub as often as I'd like, I still think cask ale rules.

Brooklyn Heights wears its affiliations proudly on its pump clip. It's an unashamedly ballsy interpretation of an American Pale Ale. Most American Pale Ales (and IPAs) are designed to be drunk cold and force-carbonated - nothing wrong with that, but when you serve them on cask, that lack of dissolved CO2 makes the whole thing slightly sweet and sticky.

Happily, Stuart Ross of Crown Brewery (for it is he) knows what he's doing when it comes to cask ale. So rather than making a beer better suited to a quick bit of chill and zizz, he knows how to meld the hop-forward character of an APA with just the right fullness of malt body. The end result is a classic English ale that is both traditional and modern. It's trad because there's just enough earthy bitterness to it to please your old man, but at the same time, it's modern in it's marmalade-pith fruity character. There's just enough sweetness to it to balance the big, spicy bitterness in the finish.