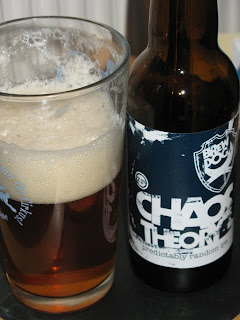 I've just completed my revision for my talk at the Hay Ale and Literature Festival. Not that I'm much of a one for cramming, but I did think it was at least worth looking up a few hop varieties and brewery locations of the beers I will be talking about. Hey, none of us are born with knowledge - did you think I absorbed it by osmosis from the beer?

I was one of those annoying university students who paid attention in lectures, and so revision was just that - looking over my notes and saying 'ah yes, I know that already'. Whether I manage to retain the same composure in front of a group of real ale fans tomorrow as I rhapsodise about Vienna lager, black lager, extra IPA, trappist ale and weizen doppelbock is another thing. Oh well,they can but boo and throw beer over me - that hasn't happened since a particularly disastrous gig at Salisbury Arts Centre in about 1991.

BrewDog's Chaos Theory (7.1%abv) is back by popular demand. It was inexplicably delisted about 18 months ago, for who knows what reason. My guess is that Nelson Sauvin became too fashionable to piss away on an everyday beer, not that there is anything dreary or mundane about Chaos Theory. It's their single hop Nelson Sauvin IPA, and it's a great glass of beer. I really like beers that suggest things without actually forming a committee and going on a march with a banner that says "LOOK AT ME! I'M STUFFED FULL OF INGREDIENTS!" and despite it's strength, Chaos Theory manages to do that. It's just beery enough to appeal to regular beer drinkers, but has enough subtle hop-derived fruitiness to be appealing.

Grab some while you can.
Posted by ZakAvery at 22:25